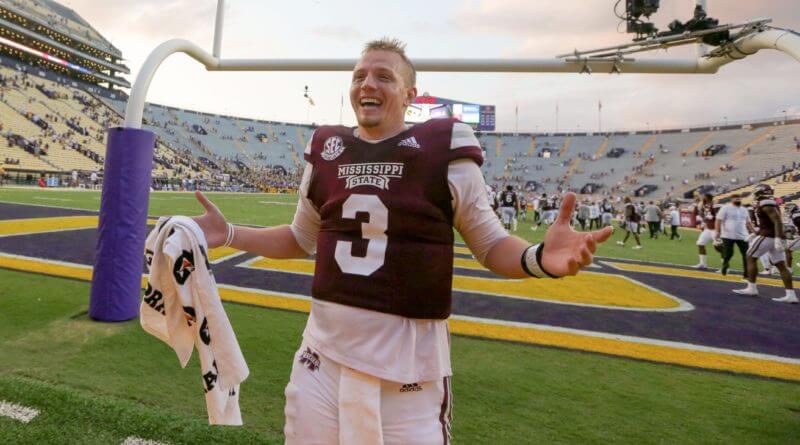 After a historic passing performance against the defending national champion LSU Tigers, Mississippi State Bulldogs quarterback K.J. Costello earned the nod as the Southeastern Conference’s Offensive Player of the Week in week one.

Costello passed for an SEC and MSU single-game record 623 passing yards along with five touchdowns and two interceptions.

The full release about Costello from the SEC can be read below.

“After a record-breaking debut, graduate transfer senior quarterback K.J. Costello was named the Walter Camp FBS National Offensive Player of the Week on Sunday. Costello began his career as a Bulldog by propelling State to a 44-34 win on the road against defending national champion No. 6 LSU. Operating in head coach Mike Leach’s air raid offense, he threw for 623 yards, shattering the MSU and SEC single-game passing yards record. His 623 yards also ranks 11th in NCAA history.

Costello completed 36 passes on 60 attempts, which were also MSU school records. He matched the program record for passing touchdowns with five. Costello completed 15 passes of 20 yards or more and found 10 different receivers during the game. He kept the offense rolling on third downs, going 7-of-11 passing for 194 yards. He also added three touchdowns, including a 24-yard strike to Osirus Mitchell with 3:39 left in the game that made the score 44-34.

Spreading out the passing attack, Costello led three Bulldogs to career-high receiving days. Mitchell finished with 183 yards and two touchdowns on seven receptions. Kylin Hill and JaVonta Payton both set career highs in catches and yardage. Hill tallied eight receptions for 158 yards and one score, while Payton caught six passes for 122 yards. It was the second time in program history that a trio of Bulldogs eclipsed the century mark in receiving yards, with Joe Morrow (117), De’Runnya Wilson (105) and Fred Ross (102) completing the feat for the first time in the 2014 Orange Bowl vs. Georgia Tech on Dec. 31.”