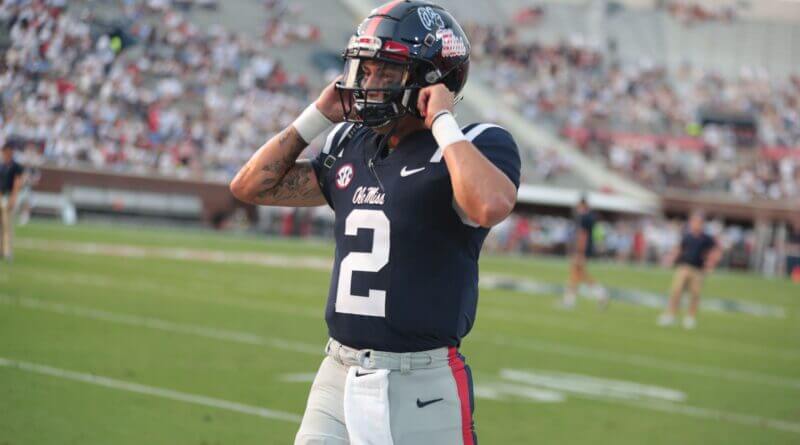 Rogers, who is coming off a record-setting six touchdown, 415-yard passing performance against Auburn, and Corral join finalists from eight other schools vying for the coveted award, which is named after College Football Hall of Famer Charlie Conerly, who also starred for Ole Miss and the New York Giants.

The 2021 C Spire Conerly Trophy finalists, in alphabetical order by school, include:

Alcorn State University – Senior defensive back Juwan Taylor, the SWAC defensive player of the year in 2019 and product of Provine High School in Jackson, made 58 tackles and recorded one interception for the Braves, who are 5-4 overall and 4-2 in SWAC league play.

Belhaven University – Senior running back Brad Foley from Memphis led the Blazers in all-purpose play with 1,035 rushing yards and 11 touchdowns. He completed three of his four passing attempts on the season, caught 15 passes and scored two more touchdowns and returned two punts. The Blazers finished with a 7-3 record, the best single season win percentage in program history.

Delta State University – Redshirt senior linebacker Marvin Terry made 45 solo and 10 assisted tackles and sacked opposing quarterbacks 10 times. His 20 tackles for loss led the Statesmen team. His best game was against Jackson State, when he made 11 tackles. Terry also had four sacks in a game against Shorter.

Millsaps College – Junior wide receiver Moïse Tezzo led the Majors and the conference in receiving with 36 receptions for 670 yards and seven touchdowns. Tezzo’s longest catch was 63 yards and he rushed for 100 yards and a touchdown, tallying 1,067 all-purpose yards with 223 kickoff return yards and 69 punt return yards, including one for a touchdown.

Mississippi College – Linebacker Jonathan Jones, a graduate transfer from Southern Mississippi, is a Charleston, Mississippi native who led the Choctaws defense with 58 solo tackles and 19 assisted tackles. Jones also recorded three sacks and 4.5 tackles for loss during the season.

Mississippi State University – Sophomore quarterback Will Rogers, a Brandon High School product, has led the Bulldogs and Coach Mike Leach’s “Air Raid” offense with 407 completions in 538 attempts, accounting for 3,722 yards passing and 29 touchdowns. He was named Walter Camp offensive player of the week for his weekend performance against Auburn.

University of Mississippi – Redshirt junior quarterback Matt Corral, who has received national attention as a Heisman Trophy candidate, has led the Rebels to an 8-2 record and completed 206 of 309 passes for 2,774 yards and 17 touchdowns. Corral is the team’s third leading rusher with 523 yards and 10 touchdowns.

University of Southern Mississippi – Redshirt sophomore defensive back Malik Shorts, a Bassfield native, leads the Golden Eagles in tackles with 81, including 41 solo tackles, two tackles for a loss and two interceptions on the season.

The C Spire Conerly Trophy presentation is scheduled for Tuesday, Nov. 30 at the Country Club of Jackson, 345 Saint Andrews Drive, in Jackson. A 5:30 p.m. reception will be followed by the 6:30 p.m. dinner program and trophy presentation. Coaches and finalists from all the schools are expected to attend. CBS football analyst Charles Davis will be the master of ceremonies for the awards program. Tickets are available below.

Now in its 26th year, the C Spire Conerly Trophy is named after the late Charlie Conerly – the only football inductee in the Mississippi Sports Hall of Fame who was an All-American at a Mississippi university, an NFL rookie of the year, and NFL All-Pro member and quarterbacked a team to a world championship. C Spire has sponsored the outstanding player awards program for football in Mississippi since 1998.