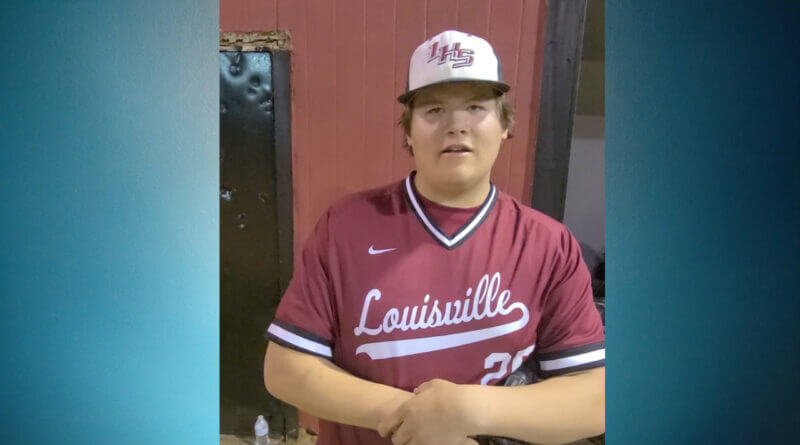 NOXAPATER — “Being a leader at young age let’s me know I can step up when my team needs me,” said Wyatt Long after Louisville’s 15-6 victory of Noxapater last night. The freshman had 10Ks along with a couple of base hits to help his team prevail.

It was a rough night for the Noxapater Tigers. At the end of second inning they were already down 6 runs. Hayes Caperton started off on fire from the mound for the Louisville Wildcats today. The lefty wasn’t so bad on the offensive side either. Going 3-5 with a few RBIs to put the icing on the cake.

“We had to clean it up. We had a few errors right there to let them get back in the game,” said Coach Morrow.

In the 3rd and 4th inning the Tigers started to roar. They had brought the game to within four points after a few big hits. Their dugout was starting to get life and they were rallying.

Noxapater had a very good inning on defense at the top of the 5th. A nice double play would send them to the bottom of the fifth, but Noxapater would only score one run. The score was now 11-6, Wildcats.

“It feels good to get the win. It was a team effort. We had to hit the ball well and play the field,” said the freshman Hayes Caperton after the game.

Hayes started it off with nice base hit to bring in more runs. Kaydo white hit a single right behind second that landed in center field.

The Wildcats were hot on the sticks again.

Caperton added on a nice triple that brought in all three runs on base.

“If these guys put in the work they have the chance to be quality baseball players. We are very young, but these guys have a lot of talent. I think we have a bright future!” Principal Turner spoke very highly of Louisville’s baseball team when I talked to him after the game. “Coach Morrow is a very good coach that cares. He is always promoting our kids!”

Wyatt Long would come back and finish the game off for the Wildcats. He was on fire from the mound today. “I trust in my coach to call the right pitch and I just choose the placement!” He is very well spoken and even gave his teammate Hayes a boost of confidence before I interviewed him.

Trey Eiland is the only senior on the team and he went 3-3 yesterday. He was on fire with the stick.

As you have read throughout this article the Wildcats have a good future ahead of them. Being from Louisville I was concerned, but I noticed they have a lot of 8th and 9th graders starting. The classes of 2023 through 2027 will be the ones to help push the Diamond Cats through.

I look forward to watching this team over the next several years.