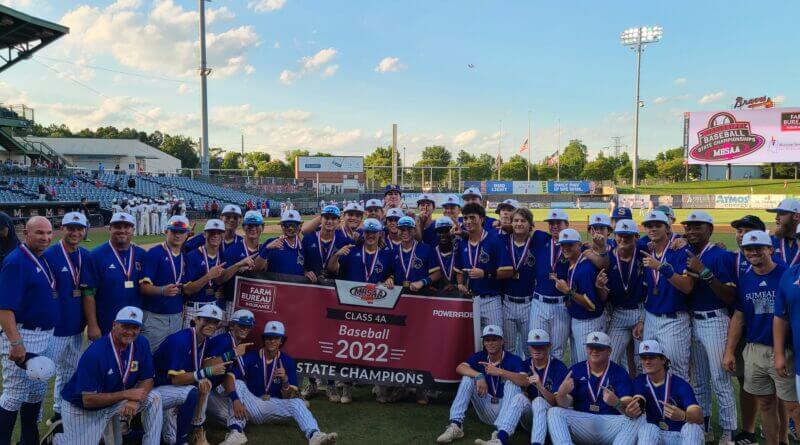 Sumrall Bobcats pounce on Warriors 11-4 to sweep Pontotoc and win the 4A state title. Andrew Knight was on fire as he struck out ten batters this game. Ethan Aultman is series MVP.

Pontotoc started this game off on fire just like they did game one. The Warriors put up four hits in the first inning. Jonathan Carnes was on fire from the mound in the first two innings.

The bases were loaded and Jabari Farr crushed a 390 foot ground rule double. In any other park this would have been a grand slam.

Ethan Aultman had a RBI fielder’s choice and Cade Dedeaux scored on a throw. Sumrall tied the game again and the score was 4-4 at the end of the third inning.

The Bobcats would definitely crank up the sticks in the fourth inning. Pontotoc was having a few problems on defense and Sumrall was taking advantage of it. Walker Long scored on a wild pitch and gave Sumrall their first lead of the game, 5-4. It was a very wild top of the fourth inning.

“I’m feeling awesome,” said Aultman. “We had the momentum from game one. We just needed to ride it into today. That’s what we did and it is an awesome feeling”

Sumrall came out and retired the side of the Warriors and we were headed to the fifth inning very fast.

There was a pitching change in the fourth for Pontotoc from Carnes to Jeffrey Pound. Levi Odom introduced him to the game fast by crushing a ball 380 feet and brought in Malek McNair. Odom did a nice dance on second after his big hit. This is another ball that would have been a homerun in any high school park. That made the score 7-4.

“There’s a lot of good feelings in the world, but this one here is pretty close to the top,” said Coach Davis. “I appreciate yall ranking us. Rankings is just a number during the season, you do want to finish number one and it gives you confidence when people think highly of you.”

Andrew Knight was on fire today. He struck out nine batters from the third thru fifth inning. This kid was not playing around on the mound.

Pontotoc would making a pitching change from Pound to Walt Gardner in the sixth. With two outs in the top of the inning he walked a batter with bases loaded and the score was now 8-4.

Sumrall pitched well and played great defense in the bottom of the sixth. Knight was done pitching and Smith stepped up and didn’t disappoint. He retired the side fast and the inning was over.

The Bobcats added on three more points in the last two innings to make the score 11-4. Their sticks picked up in the second part of this game. Pontotoc just couldn’t ever get going after the second inning.

Sumrall finished off a very great season. It was great to see them get this win in front of their crowd who showed up in big numbers. They only loss one game this year and they were on a roll. “There no better feeling in the world than doing this in front of all these faithful fans,” said Ethan Aultman. “They supported us through our highs and our lows and that’s awesome.”

“Losing one game earlier in the year I think prepared us for game one of this series,” said Davis. “We already had that lost and the monkey was off our back.”