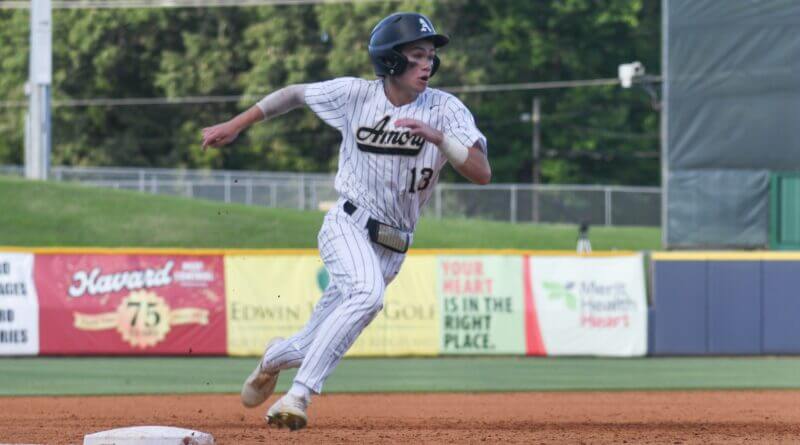 Amory didn’t get a run until the sixth inning. They had fifteen hits in their 13-2 victory over Seminary. Tyler Sledge was in control of the hill and had eight strikeouts.

“This win is great and that’s a huge win coming off our shoulders. We got a little bit to fall back on,” said Tyler Sledge.

This game started out very slow for the Panthers. They were playing great offensively and defensively but just couldn’t seem to get on the board early in the game.

“I think our throats were kind of tight,” said Coach Pace. “We made two base running mistakes early. We were hitting it getting base runners on early, but couldn’t score. McComb gave us a break and busted the game open.”

That’s exactly what he did for them in the sixth inning. Will doubled on a line drive that brought in the first three runs for Amory. Reed Stanford singled on a line drive to left field and gave them four runs. Seminary just couldn’t get it together today.

In the top of the seventh Amory would crank the engines up again. Clayton Reese brought in Ethan Kimbrough and Bo Rock to start it off. Seminary tried to slow them down by bringing Logan Craft in, but it didn’t work. He had two players advance bases after a wild pitch and the Panthers would eventually score two more runs.

“I had a slump with my foot and couldn’t get the drive I wanted to at first,” said Sledge. “You got to push through and use some finesse to try to get roll over and pop flies. We pulled through and it felt pretty good. We got a lot of hit today, but we got to come out again on the bats early in game two. We got to start early bringing runs across the plate. It was good having those insurance runs at the end, but you can’t always trust in that happening. We got to chip away all game.”