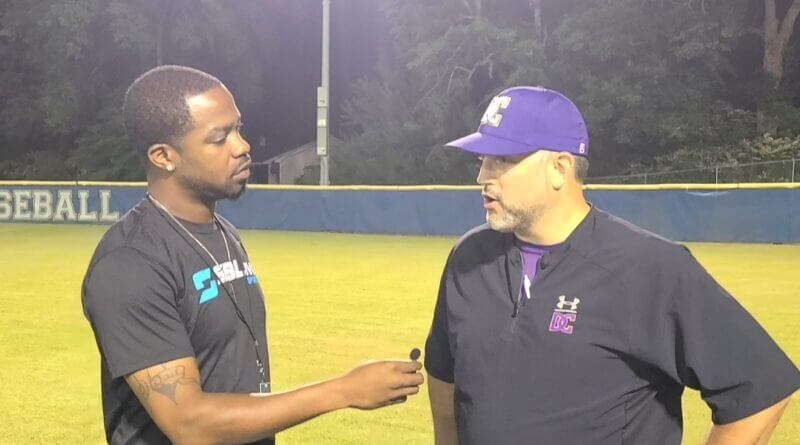 Bradley Lofton was on fire from the mound striking out nine batters in DeSoto Central’s 6-3 victory over Oxford. He only allowed two hits. His fastest pitch tonight was clocked in at 94mph. This kid has a cannon. “My breaking ball was working very well for me tonight. The fast ball was amazing too,” said Lofton.

OXFORD, MS — The game started out very fast for DeSoto Central. The score was 4-0 thru two innings. Their sticks were on fire and their pitching didn’t allow a hit until the 3rd inning.

Oxford would get a RBI single from Smithwick in the the 3rd that would finally put them on board. It was a slow hitting night for the Chargers.

Coleton Coates would drive in the second run of the inning with a deep double off the wall in center field. DeSoto Central was back to rolling the runs in. In the bottom of the 4th Lofton accounted for two outs, picking a runner off at first base and immediately following up with a strikeout at home plate.

“I knew I could catch them sleeping. The umpire was making some questionable calls, but that is a part of the game,” said Lofton

In the top of the 5th Oxford would make a pitching change from D. Webb to J. Hill. Webb had two strikeouts before he was pulled. The bottom of the 5th would start off with Bradley Lofton walking the first two at bat. Next he picked off the second player he walked. A pop out to right field would bring Oxford their first run since the 3rd inning. The Chargers finally got their second hit of the game that brought in the third run.

“At this time of the year or anytime of the year I tell my guys to watch your actions,” said Coach Monaghan. “They’re doing this for the hundreds of guys that came before them. If we do go down we go down with a fight.”

The bottom of the 6th inning would start off with Lofton hitting Stinnett and putting him on base. For a moment Lofton was starting to look exhausted. He found his second wind striking out Rayburn to end the inning.

Jack Hill and his Oxford defense started the top of the 7th well. Three up and three down. It was time for them to try to make a rally and try to get this game in their hands. The Chargers needed the sticks to get rolling. Harper started out the 7th looking at the 4th pitch which was the third strike. Kent would make contact and send one to second, but got threw out at first. Kent sent a missile down third that was too hot for Moore to handle. That would be DeSoto Central’s first and only error of the game.

Bradley Lofton came right back on the mound on fire. He struck out the first two hitters before Smithwick would fly out to left fielder, Tapper.

The crowd made this game very exciting. Both fan bases were pumping it up for their teams.

Game two will be Monday at 7pm in Southaven.

“I think we just need to continue doing what we are doing. Hitting the ball and playing good defense,” said Lofton