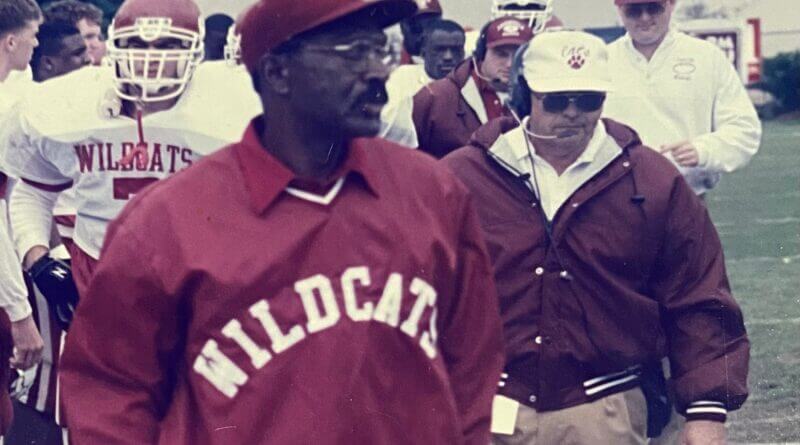 LOUISVILLE — “STAY LOW COBURN. YOU GOTTA STAY LOW!” I can still hear Coach MC Taylor’s voice in my head. Anybody who played for him or was around him at practice on a daily basis will probably say the same.

You could immediately see the reaction of the Louisville and Noxubee Co community. Two of the places he had his longest coaching tenure at.

He is a big reason I have the knowledge of MS high school sports today. He would give me tapes of my dad (Michael Frazier) and his team of the late 80s. I saw tapes of Jeremiah Sangster and his son Michael Taylor cause of him. Coach Taylor had been around the game so long and had seen so many greats come thru from the 60s til the 2010s.

Coach Taylor was well respected in every community he ever worked at. He left a mark on every kid he coached whether it was on the football field or PE. His football coaching style was VERY simple and straightforward. Stay low, use your forearm and make good tackles. He never accepted anything but your best effort.

He was the secret sauce behind a lot of state championships Louisville won (85, 86, 91, 93, 95, 07, 08, 13). He didn’t carry the defensive coordinator title, but he was definitely a top general on any defense he was a part of. He didn’t wear headphones or carry notes. All he needed was his stick with the football glued at the end. He won gold balls under Mike Justice, Bobby Hall, Lynn Moore and MC Miller.

Him and MC Miller were a great tandem together. They helped start the foundation of what the Noxubee Co football program is today.

Coach Taylor was one of the very few coaches who can say he taught a kid’s dad and granddad while being the coach of that kid. Before he retired he coached for 50 plus years.

He was my PE coach in my elementary days and I can still hear his voice saying, “TOE KNEES BELLY BACK.” One of his favorite exercises.

Coach Taylor was a punishing running back that graduated high school from Lanier High in 1959 in Jackson and furthered his education at Jackson State where he graduated in 1963. He was a great running back at JSU as well.

MC Taylor has been getting a lot of kind words throughout the state from coaches, writers, players, etc who he left a mark on.

Hate to hear that. One of the greatest https://t.co/MnxOP8Rryo

“Coach Taylor coached with my dad on the 91 Louisville state title team. I was 11 years old. He was always good to me. Had one of the best ‘laughs’of my lifetime. I can hear it to this day!” -Will Hall (Southern Miss Head Football Coach)

Coach Taylor coached with my dad on the 91 Louisville state title team. I was 11 years old. He was always good to me. Had one of the best “laughs” of my lifetime. I can hear it to this day! https://t.co/SEgztvaEsD

“Coach Taylor is one of the best coaches I ever played for. Him and Miller taught me a lot!” -Pervis Holmes (played LB on Louisville’s 91 state title team)

Jamaal Coburn was very happy when Coach Taylor arrived under Brad Peterson’s staff in 05. It allowed him to be able to make an immediate shift to the defensive line. Coach Taylor was very much behind that and helped Coburn become one of the best lineman in the state that year. Coburn was the only player from our Wildcat team to make an all star game that year (Bernard Blackwell Classic). “Coach Taylor was my guy,” said Coburn after hearing the news.

That’s the type of impact he had on the game. Coach didn’t let many athletes pass him up or just go to the waste side. He made sure he tried his best to get his best results all out of the talent of the communities he was in.

You don’t often get a coach like MC Taylor. If you didn’t see him walking on Hunt Ave, Hwy 15, or anywhere in the Day Ave area of Louisville then you may not be a true Wildcat. He left so many great memories with us carrying around his stick as he got his exercise in. He became great friends to his students and eventually taught their kids. We were always happy to see him smiling big driving his white truck around the Louisville community. He was married to Gladys Taylor and they had two kids. Coach MC Taylor is already greatly missed.