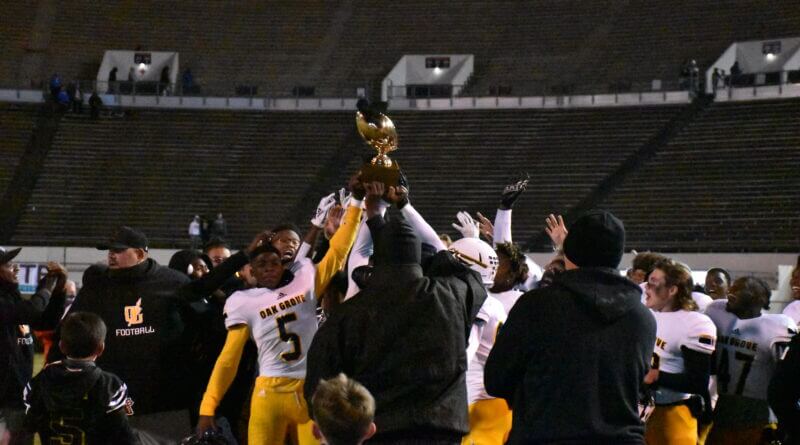 JACKSON — When Oak Grove quarterback Kabe Barnett reached the pylon and put the Warriors within a point of the defending 6A champs, head coach Drew Causey knew exactly what he was going to do. He turned to a play that his team had “ran a thousand times in practice.” It finally paid off.

“When we got the ball, I told our offensive coaches if we score, go for the win. It worked,” Causey said. “We knew exactly what we were going to do. We ran it three times a day in practice, knowing when we needed it. It worked at the right time.”

The Oak Grove Warriors (13-0) finally broke through after two years of agony and won the rematch with the Oxford Chargers (12-1) in a thrilling 29-28 6A classic at Mississippi Veterans Memorial Stadium Friday. The Warriors earned their second state title in school history, their first since 2013. The win also snapped a 25-game winning streak for the Chargers.

Barnett completed 21 of 30 passes for 200 yards and rushed for two scores.

“Kabe (Barnett) is unbelievable. One of the best in the state,” Causey said. “He fought through a lot tonight. Our O-line did an exceptional job of keeping him upright all night long.”

A large chunk of those yards came on his team’s opening drive.

After forcing a three-and-out, Oak Grove found the scoreboard just four plays into the game. A pair of big pass plays set up Courtland Harris for an eight-yard score, giving the Warriors a quick 7-0 lead with 9:40 left in the opening frame. The Chargers returned the favor after failing on a fake punt on their previous drive. Michael Harvey rolled out and found Kortlen Wilfawn from 11 yards out to tie the game about seven minutes later.

The Warriors bounced right back. Barnett called his own number early in the second quarter and found the end zone with his legs near the goal line. Two drives later, Oxford tied the game once again with Omar Howell finding the end zone on the goal line going into the locker room at halftime.

Both teams combined for three turnovers to begin the second half, with Oxford capitalizing off the latter one. D.K. Johnson continued an outstanding receiving night with a 10-yard touchdown catch from Harvey on a fade route. The Chargers had their first lead, 21-14 with 3:02 left in the third quarter.

Early in the fourth quarter, Oxford failed to take a two-score lead. They elected to convert a 4th down in field goal range and lost the gamble. After forcing another punt, Harvey attempted to throw a tunnel screen and ended up in the hands of an Oak Grove defender. Jaylen Aborom took the football 30-yards the other way to tie the game with 6:15 left in the game.

The Chargers answered yet again. They used more chunk plays to reach the Warrior red zone. Harvey found Alec Vaughn open in the seam for a 10 yard touchdown pass, leaving Oak Grove with 3:52 left to score, trailing 28-21. The Warriors converted multiple third downs en route to the goal line. On 4th-and-2, Barnett found an open hole and raced to the corner of the end zone for six. Oak Grove went for the win on a two point conversion and succeeded, a pass from Barnett to Traveyon Moore on a drag pattern, sealing the 6A state championship game for the black an gold.

“That was an unbelievable football team on the other side of the field. This is an instant classic for sure,” Causey said.