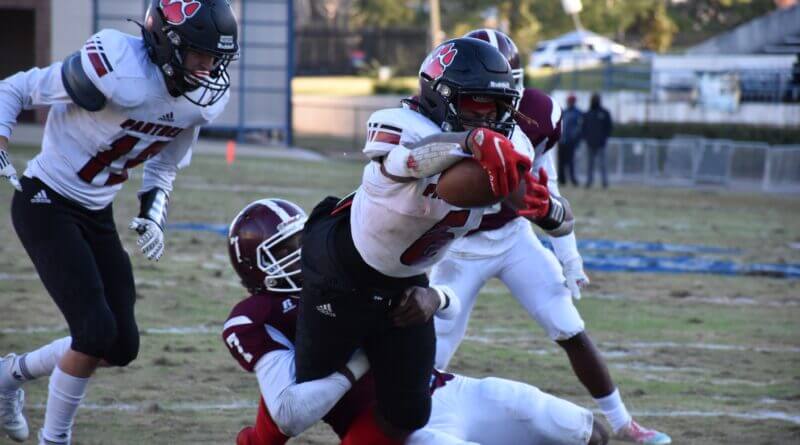 JACKSON — When Biggersville’s second half magic and Goldman Butler tied the game up at 14-14 with 58 seconds left to play, Lumberton wasn’t playing for overtime. They wanted to win, and win immediately they did.

Knylan Willis’ game winning 42-yard touchdown catch from Rodney Parker ended Biggersville’s magical season and allowed the Lumberton Panthers to knock off the Lions 20-14 at Mississippi Veterans Memorial Stadium on Friday. At the end of the night, Lumberton head coach Zach Jones had to do one simple thing.

“Trusting the kids,” Jones said. “I’ll be honest with you. I was sitting there wondering what I’m going to do. We got good field position and I just believed in our kids. Wow. That’s all I can say. I’m really proud of our kids. They fought their butts off against a really good football team.”

“(Henry) would be the first to tell you, he couldn’t do it without his offensive line blocking for him,” Jones said. “He’s had a heck of a football player for sure. He might go down as the best in Lumberton history, maybe in Mississippi history if you look at his rushing stats.”

The Panthers had a conformable 14-0 lead going into the break after another solid first half performance on defense. The Lions refused to throw in the towel.

On the opening drive of the third quarter, facing 4th-and-5 on Lumberton’s six yard line. Third string quarterback Goldman Butler released the football while being dragged down by a linebacker and connected with Dylan Rowsey in the back of the end zone. Just like that, momentum swung and the lead was cut 14-8.

Midway through the fourth quarter, the Lion defense came up with a huge red zone stand. Robert Henry, who was almost perfect on third down throughout the game, was stuffed on 4th-and-4. While Biggersville wasn’t able to capitalize, they had one more chance with 2:15 left to play. It happened.

A deep ball and yards after catch set up Goldman Butler with an easy goal line score. The Lions elected to go for two, and the ball was overthrown on the two-point conversion. Biggersville continued to play press coverage and were beaten off the line of scrimmage, allowing the game winning score with under a minute left.

“I’ll tell you what. This football game was big, and us winning the state championship and all, but 10 years down the road, I want these kids to do something successful down the road. You can’t tell this this group doesn’t have pride and character. That’s what I’m proud of,” Jones said.