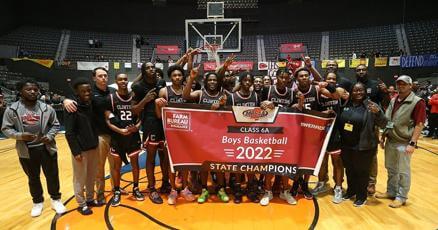 JACKSON — “If there is still time on the clock I do not doubt these guys on my team!” Coach Taylor reminds us that hasn’t much changed from interview to interview. After his team’s state championship win that made three times we have interviewed him this year. Once at the Rumble in the South and twice at the Big House. Each time his team had to overcome a deficit to win. The two times at the Big House were both 10 point plus deficits.

Kimani Hamilton and Allen Hughes have been two generals for the Arrows all year. Allen Hughes holds down the fort at times and Kimani relieves him when he is playing off the ball. This weekend they were both amazing. Hughes had 18 points in their championship win and Hamilton had 24. They both turned it up a notch in the 4th quarter of both of their games last week at the Big House.

Clinton’s final four match up against Brandon was a very good game. Both teams were trading punches like Joe Frazier and Muhammad Ali. You can expect a game like that when these two teams are less than 20 minutes from each other.

However by the 4th quarter Brandon had built a ten point lead. It was shaping up to be Olive Branch vs Brandon for the 6A.

Don’t count your eggs before they hatch. My grandma always told me that.

With only around three and a half minutes left in the 3rd the score was 56-48 Brandon. The Arrows were running out of time. The Brandon bench players were stomping the ground and doing their cheer. They were even going so far as waving goodbye to the Arrow fans. These guys were getting ready to celebrate a final four victory.

This is why I love high school sports!

Kimani Hamilton fouled out at a crucial moment of the game with 3:23 secs left to play. It was over for the Arrows, right? Yea.. OKAY!

With 40 secs left Allen Hughes hit a clutch lay up to give Clinton the lead, 60-59. The Arrow fanbase was outrageously loud at this point. Hamilton didn’t sit down from time he fouled out. He was cheering his team on the whole time.

Clinton would hit a couple more Free throws and hold off to win the game, 62-59. They were headed to state to face Olive Branch.

Fast forward to Saturday evening 7pm. It was time for the Arrows to suit up and do it again. This time they were in all black. Terry Joiner and the Conquistadors were in all white just like they were Wednesday night.

Landon Jeffries and the Conquistadors jumped out to a fast lead. The guard play for Olive Branch was amazing. The Arrows were in a man to man defense and at that time it wasn’t working.

Going into the 4th quarter the score was 61-47. I was getting messages from Olive Branch fans saying the gold ball was headed back up 55N towards DeSoto County. Honestly I was thinking the same. Again, those guards were rocking the cradle all game long. Seeming to be unguardable.

An early three pointer got the Arrows going in the 4th quarter. Exactly what they needed, a quick score. The comeback was on. Coach Taylor switched to a press with the zone behind it.

Hamilton clapped his hands three hard and loud times after a score in the 4th quarter. I’ve seen him do this twice before when they were making a comeback. When he locks into savage mode it gets rough for his opponents.

With less than a minute left Mani drove the ball full court after a missed shot by Olive Branch. FOUL and count the shot. The score was 75-74 and the Arrows were down by one.

The Conquistadors missed another shot and Clinton was driving the ball down court again. With 3.1 seconds on the clock the Arrows were back on the line. Both free throws were converted.

Olive Branch would get the ball, but it wasn’t much they could do.

The Clinton Arrows won they game and were crowned back to back state champs.

“I’m made for these moments. It was no pressure. I just come out here and have fun, like I said IT AINT NO PRESSURE!” Kimani Hamilton took his shirt off and flexed for the crowd right before our post game interview with him.

Him and his team had did it again. In both wins at the Big House they overcame a ten point plus deficit. Twelve against Brandon and fourteen against Olive Branch.

What an amazing year for the Arrows!