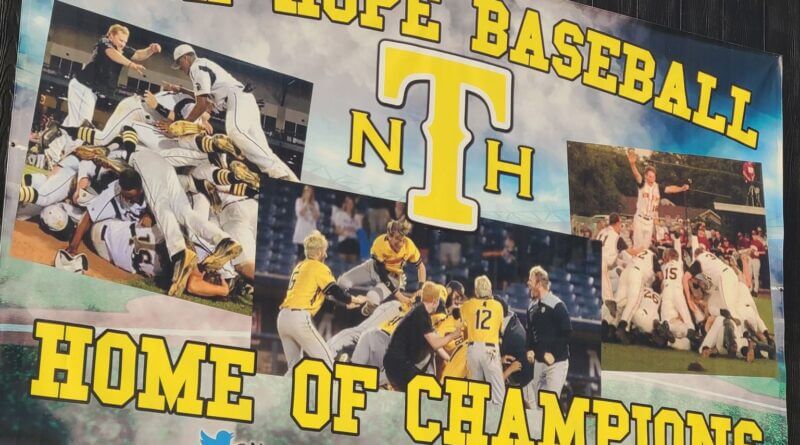 NEW HOPE — “Starkville has a lot of speed. Having Hunter back their is a great advantage. It kind of slows down their speed.” Coach Boyd is a coach’s coach. He spoke very highly of his catcher and team’s defense tonight. He was very active with his team all game, steadily coaching even when they held big leads. New Hope would sweep the Yellowjackets tonight in a double header, 7-4/13-3.

“IT’S ONLY THE BOTTOM OF THE THIRD. STILL A LOT OF BASEBALL LEFT TO BE PLAYED”  Coach Boyd hollered onto the field during the second game when his team was up 7-1.

Let’s take a step back to the first game at tthe top of the fourth. The New Hope Trojans made a pitching change from Brant Smith to freshman Austin Minchino. Boy was he throwing Rockets to close out the first game.

“We believe in Austin. He has a big arm as a freshman and throws strikes,” said Coach Boyd speaking of his freshman pitcher. He was very poised with his hair dangling under his hat. He was throwing some missiles yesterday and even switched it up a little with the trickery. Remember his name cause he will be great over the next four seasons.

Hunter Carr was on fire himself. He threw three runners out tonight and was real close to making it four. “I just wanted to throw the ball down there and let my guys make a play,” he said before getting ready to bat in the 4th. He had a few base hits and RBIs to help his team win yesterday as well.

In the bottom of the fifth Gates Gerheart went deep over the right field wall for a solo homer. That would be his third home run of the year.

The Trojans closed out the first game winning 7-4 and it was time to get ready for the second game.

New Hope has a beautiful area for baseball and I was honored to be amongst some of the best baseball fans in the state. Little kids were on the side of the field playing their own pick up baseball game. It was great to be amongst champions because I see this so much at football games. Kids behind the end zone playing football imitating their favorite players of their respected schools. You have to be in an area where tradition is key to witness this and there is a lot of tradition in New Hope baseball!

Lofton started off a little rough walking the first two batters. The bases were loaded at one point and the Jackets managed to get a run before the first inning was over.

The Trojans would strike back fast. Two base hits brought in a quick three runs. The Trojans were on top 4-1 by the end of the first inning.

The Jackets made a pitching change in the bottom of the second, but it didn’t help much. The Trojans had taken off and the score was 8-1.

Starkville would try to get back in it making the score 8-3 Trojans at the end of the third, but New Hope was too much today. They would win the second game 13-3.

The 8 time state Champs, New Hope, haven’t raised the gold glove since 2019. They are 8-1 and look to head back to Pearl, MS for the state title again this year. Coach Boyd has a great squad this year and over ten seniors their leading the way. I look for them to make a lot of noise in 5A north this year. I’m looking very forward to their division match up with West Point, March 22, in West Point.

The Trojans will be back in action at home Monday against Gordo.