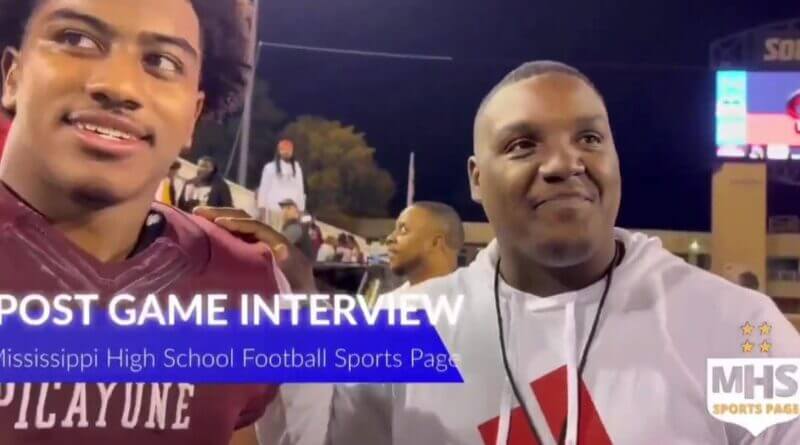 PICAYUNE — If you aren’t ready to tackle, then you may want to stay out of Dante Dowdell’s way. He is a hard nosed, old school running back that makes sure he get his every game. He has been offered by Southern Miss, Tulane, Lane College, and Florida State.

“I told you my son was the truth. I told you we was gonna win the game. You don’t listen Rion. YOU DON’T LISTEN!”

Those were his dad EXACT words after Picayune beat West Point 40-21 to win the 5A State Championship back in December. He was very excited to tell me that cause Trell and I both had West Point picked to win.

“Awww man yall doubted us? I BEEN RUNNING AROUND THE HOUSE, WORKING OUT, LIFTING WEIGHTS,” is what Dante told Trell after Trell admitted he was wrong for picking West Point. Sad to say I even said West Point’s defense would shut Dante Down. I was obviously wrong. He rushed for 25 carries, 148 yards and 2 touchdowns in the state title victory!

“It feels good to finally have my hard work pay off and start getting offers. Georgia Tech, Boston College, BYU, University of Louisiana, ULM, Arkansas Razorbacks, Penn State, Princeton, University of South Alabama, Utah, Samford University, Oregon, Mississippi State and Ole Miss have also shown interest,” says Dante when I asked about his offers. I was able to catch up with him and his dad Lawrence Hopkins again at the Heat 7v7 tryout back in January.

“I told him he needs to be an all around back. Not just a power back. Be versatile and bring the total package,” said Lawrence as we spoke about them making the drive North for the tryout. This time we didn’t have to do a lot of shouting, so I was able to learn more about Dante off the field. He is a very good kid who also excels in the classroom. His old school running style matches his old school ways. When we dapped each other up he was already smiling talking smack about the state title game again. Guess I deserved that!

“Yea I am a true work horse. I run hills and lots of other things I like to train the old school way,” was his response when I asked about his workout style. He has a lot of videos on his Twitter (@DanteDowdell) showing him running hills, doing push ups with bar bells, etc.

Picayune was a very young team last year. They had a lot of sophomores and juniors that were starting, performing at a very high level. This year they should have a LOT of leadership in the locker room.

“I think we can repeat. We have players with experience here and we didn’t lose too many guys. I think if we all work hard and do what we suppose to we can win it again!” Dante sounds very confident about the 2022 season, as he should.

Dante wears number 2 and is a punishing runner. We’ve seen that before with King Henry (Derrick Henry, RB, Tennessee Titans) who Dante says is his favorite player! Here’s what he had to say when I asked is there any running back he studies.

“I study Derrick Henry. He is my favorite player and I try to imitate his upright running style. I like to use the stiff arm a lot cause I’m a taller, longer guy running the ball!” He definitely puts you in the mind of Henry with his tall frame and nice size.

Dante will be attending the Under Armour All American Camp in February and Rivals and The Show 2022 Selection Tour by NXGN Camp in March. He will be a very busy young man all year.

“I’m working on catching the ball, route running and becoming more flexible. I have been stretching my hip flexors so I can be a more fluent runner.”

As you can see he is very dedicated to become an all around running back. Picayune is lucky to have him and so will whatever school he decides to further his education at. It is always good to talk with him and his dad.