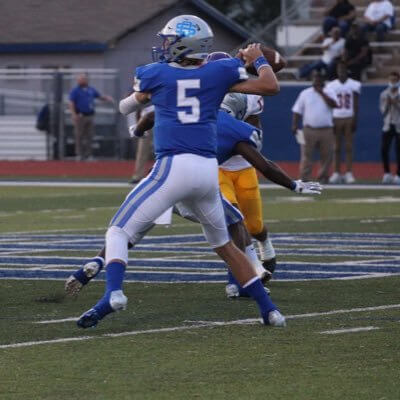 Bray Hubbard has came back from baseball season on fire in his workouts. Last season he had 2069 passing yards, 30 passing tds, 1258 rushing yards and 22 rushing touchdowns. This young man had a wonderful year. He is definitely one of the top three QBs returning in the state this season.

I can’t wait to attend the Picayune vs Ocean Spring spring game this Friday. I have been waiting a long time to see Bray in person. I was able to become a fan of Hubbard last year off word of mouth and film. Every week somebody was mentioning Ocean Springs and Bray Hubbard. It must have been around the third week of the season when I first got to check out his film and was very impressed.

Brayson is just amazing. He has great speed and he competes at the highest level of competition in the state, 6A. Hubbard is a walking highlight film. He has great mechanics and has been getting a lot better.

I love how he uses all the right fundamentals from training into games. You can watch his footwork and notice the great mechanics. On his rollout he gets his feet set and throws missiles. When he doesn’t have time to set his feet he can make the throw on the run as well. He also has great movement in the pocket.

Another great thing about Bray is his ability to escape the pocket and hurt you with his feet. Bray can get on down with the best of them. There are some plays where he is separating from defenders like a seasoned return specialists.

“Man Bray Hubbard is going to be really good this year,” said Wyatt Davis. “He has been working very hard in our sessions. He is doing great fresh out of baseball season like he has been throwing the football since the end of football season.”

To hear that Bray is doing that good at this point of the year has to be scary for the 6A South. I’m pretty sure Brayson and the squad have something in store for that whole side of the classification this year after losing in the playoffs last year to Oak Grove 28-21. I was very shocked they lost and had them picked to win 6A.

“I want to improve my game in every way that I can,” said Brayson. “Working with Wyatt has helped me tremendously on tweaking my throwing and getting ready for a even better season. Well need to get stronger and master our position individually to make another playoff run this year.”