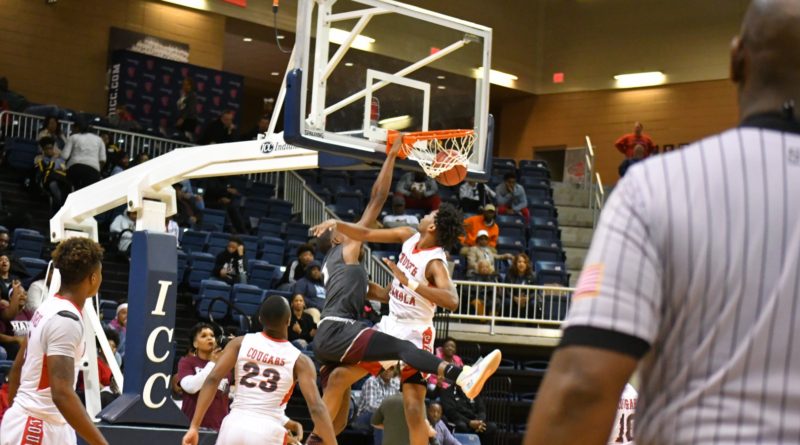 Houston and North Panola spent the majority of their Friday night matchup in the 3A quarterfinals exchanging body blows. Each team would land a few before the other would counter.

The fourth quarter is when Houston started landing haymakers, though.

The Hilltoppers connected on a trio of monster slam dunks in the fourth and exploded for a 27 points in the final frame as they picked up an 80-69 win and booked their trip to the Big House.

A single score contest after the first quarter, second quarter and third quarter, Houston kept fending off a big time game from North Panola’s Cedquavious Hunter, who finished with 36 points, to set up the highlight reels in the final quarter.

After MJ Smith of Houston and Ankerion Gross of North Panola exchanged slams, Houston’s Raeshun McGregory threw down a two handed breakaway dunk to swing the momentum firmly towards the Hilltoppers.

North Panola and Houston exchanged points from there, mostly on free thrrows, but Smith brought the house down and essentially sealed the game with a highlight reel and-1 slam dunk on a lob from Xavier Virges from the time line.

The dunk gave the Hilltoppers a 74-67 lead that they would add to late for the big victory.

Shemar Crawford led Houston with 21. Smith and Virges added 14. McGregory and Keyshon Bynum put up 11. For North Panola, on top of Hunter’s big night, Carl Robinson and Tony Davis put up 10 each.

Houston moves on to face Velma Jackson on Wednesday, Mar 4 at 1:30 PM.