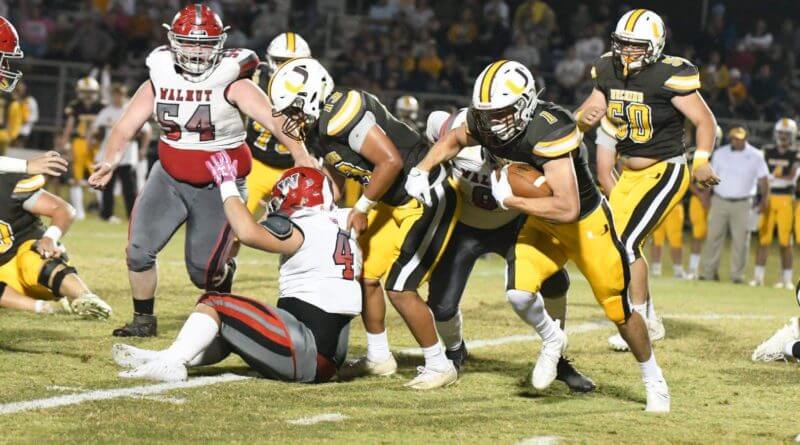 In a game that may be the de-facto 1-2A championship game, the East Union Urchins started off hot on their way to a 59-30 win over the Walnut Wildcats.

The Urchin defense started off strong by holding strong in the redzone on a fourth-down conversion attempt by the Wildcats. 11 plays later, Hayden Roberts got his team on the board on an option play.

Walnut quickly struck back with a 14-play drive that was capped off with a T.J. Colom run from nine yards out to bring the score to 7-6 after a missed extra point.

From that point on, it was all Urchins.

Colton Plunk of East Union scored on the team’s final two possessions of the first half on runs of five and 51 yards to give his team a 21-6 advantage at halftime over Walnut.

The Urchins scored four touchdowns in the third, including a kickoff return touchdown by Micah Fulgham.

T.J. Colom recorded two second-half touchdowns for the Wildcats, but it all came too late as East Union secured the 56-30 victory on homecoming.

In the battle between two stars, Colom and Plunk were fairly even in production. Colom recorded 288 yards of total offense, with 234 receiving, and three touchdowns. Plunk ran for 231 yards and four touchdowns to lead the way for the Urchins.

Walnut falls to 4-2 (0-1) with the loss and heads home to face Potts Camp as well next Friday.