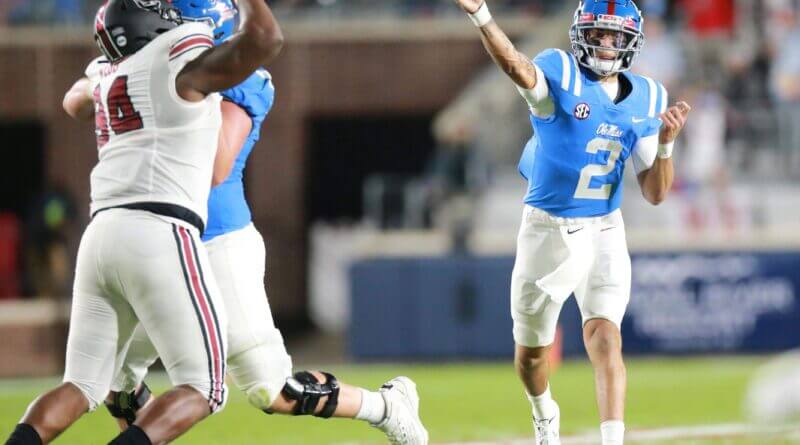 It was Military Appreciation Night in Vaught-Hemingway Stadium.

It was the debut of the new Mississippi state flag in Vaught-Hemingway Stadium.

It was only appropriate some fireworks followed it up inside Vaught-Hemingway Stadium.

In a game that seemed like video game NCAA Football 14 come to life, the Ole Miss Rebels had a historic night with 708 yards of offense, which is the most yards of offense in a single game in SEC history.

The Rebels needed almost every one of them in a hard-fought 59-42 ballgame that was much closer than the final score indicates over the South Carolina Gamecocks.

With the backdrop set, here’s the Good, Bad, and Ugly from Saturday’s much-needed victory.

Good: I love John Rhys Plumlee. He’s a fantastic athlete and seems like a person of the same caliber. However, any doubts that arose over Matt Corral being “the guy” after struggles against Arkansas and Auburn news to be put to rest. Corral became the first Rebel to ever eclipse 500 yards passing in a single game. In quarterback record books that feature the likes of Archie Manning, son Eli, Jeavon Sneed, Chad Kelly, and Jordan Ta’amu, Corral delivered a performance never before accomplished by any of those individuals. Game ball to you, Mr. Corral.

Good: Elijah Moore. The man is on a mission. After an end to the 2019 season that has already been mentioned more than enough, Moore has done everything right to redeem himself in 2020. After last night’s 13-catch, 235 yard performance, he is only the fourth and fastest Rebel to reach 1,000 receiving yards in a single season. What a season for the man who may actually be the front-runner at this point for the Biletnikoff Award.

Good: I love Lane Kiffin’s aggressive play-calling. It’s almost become a meme to hear the announcers talk about the “analytics” that drive his decision-making, but he has brought something unique to what many teams in the past few seasons had already recognized as a dangerous offense. Offensive coordinator Jeff Lebby calls great games every week, but Kiffin’s unique gambles in what most people would expect to be safe, easy decisions keeps defenses on their toes and the Rebel offense in control the majority of the time.

Bad: So, this was looking like it may fall into the Ugly. However, the Rebel defense finds its way up one category. Don’t get me wrong because I’m sure it was a performance that even Coach Kiffin is going to let them know was not near what is expected or needed. However, in these shootouts, it always comes down to which team can get a big stop late. On Saturday, it was the Rebels who stopped the Gamecocks on there final three drives of the second half. Much-needed and well-timed stops were the difference maker in a game that didn’t see much of that for the opening three quarters.

Bad: This doesn’t necessarily relate to last night, but it also does in a way. Looking back, dropping very winnable games to Arkansas and Auburn a few weeks prior still cuts deep. Not because it took away all the momentum (because it seems the Rebels retained a lot of it last night), but because it is looking like a very real possibility that Ole Miss could finish at or above .500. With the Texas A&M game next Saturday rumored to not being played, that leaves the Egg Bowl in Oxford and a road bout against rival LSU left on the season. Mississippi State and LSU seem like very winnable games based on how they have projected this season to this point, but if you want to finish at or above .500, the margin of error might soon be out the window.