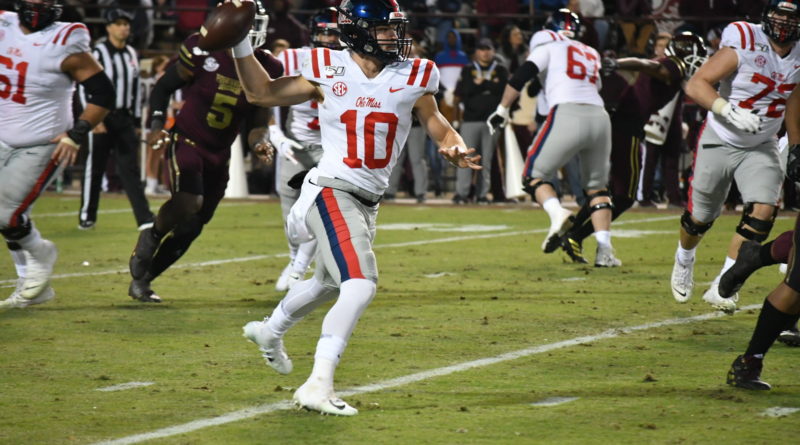 I’ll keep it short and simple: that was one of the most embarrassing losses in Ole Miss sports history last night. It was a game that the Rebels didn’t really have business having a shot to win late, but an answered prayer on fourth-and-twenty four gave them a shot.

However, a crucial penalty and missed PAT sealed Ole Miss’s fate for the 2019 Egg Bowl and season. So, here is the final Good, Bad, and Ugly of the 2019 football season after the 21-20 loss to Mississippi State.

Good: I want to give Mike Macintyre and this defensive unit one last heap of praise. Have they been perfect this season? No. Did they play a perfect game last night? Not even close. However, they did exactly what was needed to give their team a chance to win. The unit only allowed one second-half score, and that score came after a John Rhys Plumlee fumble that gave the Bulldogs great field position. Along with that, they bowed up and stopped MSU on the crucial late drive to give the offense one last shot to tie it up. Shout out to this group and coordinator Macintyre as this defensive group is what I’m most looking forward to about next season.

Bad: The potent rushing attack of Ole Miss failed to get anything going last night, simply put. Plumlee was held to his lowest outing of the year with 18 carries for 34 yards. He did, however, in my opinion, have maybe his best game throwing the football. He looked a little more decisive at times and showed the ability to make good, well-timed throws. So, this is not a bad section on Plumlee. He is the future. This is a reflection on the running game not getting consistent production against the SEC’s 12th-ranked run defense.

Ugly: Anyone else remember how the offensive line had steadily improved all season? That seems like ancient history after last night. The Bulldogs front four lived in the backfield last night, which was a big part of the run game being unsuccessful. It also kept Plumlee under constant pressure when he dropped back and forced him into horrible situations. It was definitely not the outing you wanted to see from this group in the final game of the year.

Ugly: Elijah Moore and Luke Logan. Simple enough. Moore belongs here for his unsportsmanlike celebration ala D.K. Metcalf. There is a time and place to rub it in and celebrate in a rivalry matchup. That’s why I’m upset as a Rebel fan. When you take a late two-score lead, it’s a little more forgivable to go overboard on a celebration. However, when you are still a PAT away from tieing the game and sending it to overtime, that may be the time to stay on two legs instead of four. As for the latter, Logan was put in a tougher spot than a usual PAT, but a 35-yard field goal is still a easy chip shot by college kicker standards. It also capped off a season for Logan in which he went 11-19 on field goal attempts and 33-36 on PATs. Neither of those stats are up to par with what a college kicker should be. Moore should be reprimanded and punished internally. As for Logan, I’m sorry, but it is time to bring in a fresh face at placekicker.