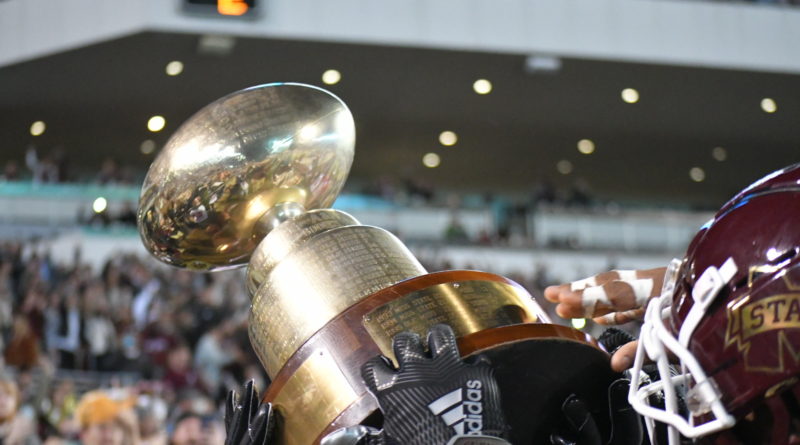 The biggest game in Mississippi college football each year did not disappoint with one of its wackiest battles ever. Turnovers, touchdowns, and terrible celebrations was the story as Mississippi State retained the Egg Bowl in a 21-20 victory over Ole Miss.

The action began quickly as Ole Miss forced the Bulldogs to an immediate three-and-our. After this, the Rebels were driving close to the red zone until Jerrion Ealy fumbled the ball away.

After this, Nick Gibson rumbled in for a 27-yard touchdown run to give Mississippi State a quick 7-0 lead.

In the second quarter, Garrett Shrader ran it in from one yard out to give the Bulldogs a two-score lead. Ole Miss would fight back, however, with a two-yard run by John Rhys Plumlee to give the Rebels their first score of the game.

This gave Ole Miss a little bit of life, and they capitalized with a Jerrion Ealy five-year touchdown run with less than a minute to go in the first half. This led to the game being all knotted up at 14-14 at the end of the opening half.

After Shrader and Plumlee exchanges fumbles early in the third quarter, the former garnered his second rushing touchdown of the night. This allowed the Mississippi State to take a 21-14 lead into the final stanza.

Matt Corral entered in the ballgame for the Rebels final two possessions, which led to a red zone interception by Marcus Murphy.

The Bulldogs had a chance to run the clock out and end the game, but the Ole Miss defense came up with a big stop to give the offense the ball back with two minutes left.

The first five plays did not go the Rebels way, and the offense faced a fourth-and-twenty four deep in their own territory. However, all hope was not lost as Corral found a streaking Braylon Sanders for 57 yards to keep the game alive.

After battling for inches, Corral found Elijah Moore in the end zone from two yards out to potentially tie the game at 21-21. This was not to be, however, as Moore revived D.K. Metcalf’s “peeing dog” celebration, which warranted a fifteen-yard unsportsmanlike conduct penalty.

With this, Luke Logan was forced to kick a 35-yard PAT, which he missed. The ensuing onside kick was recovered by the Bulldogs, and Mississippi State defended home-field and the Golden Egg with a 21-20 victory.

With the win, Mississippi State improves to 6-6 overall (3-5 in the SEC) and heads to a bowl game for a tenth-consecutive season. As for the Ole Miss, they finish the year 4-8 (2-6 in the SEC) with the loss and officially are bowl-ineligible for the fourth straight season.