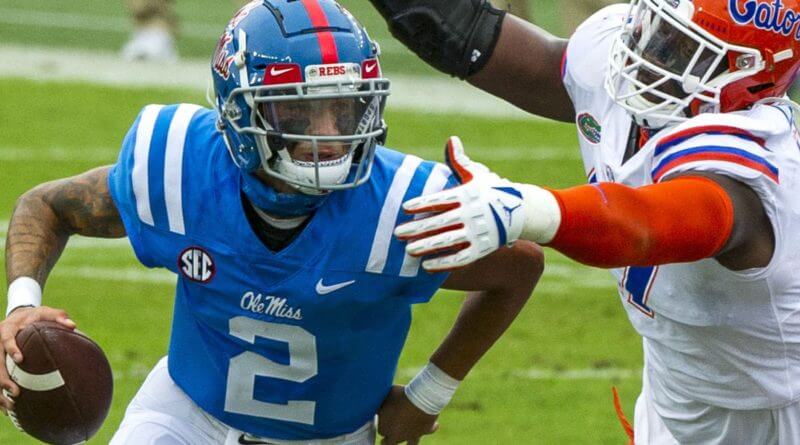 After opening the season with a 51-35 loss to #3 Florida last week, the Ole Miss Rebels made a point all week that there would be much better play, especially on defense.

While it wasn’t always there for the defense, the offense continued to show major efficiently in a 42-41 win on the road against the Kentucky Wildcats that was defined by a missed extra point.

Ole Miss started quickly with a opening drive touchdown on a one-yard rush by Jerrion Ealy.

Despite an opening drive fumble, Kentucky would eventually fire back in the first quarter to tie the game up 7-7.

From that point on, Ole Miss trailed for a large chunk of the game.

Kentucky continued to gash the Rebels with the run throughout the first half, which helped them to take a 21-14 lead into the locker room.

The Wildcats started off with a score on a run by Christopher Rodriguez Jr. from 22 yards away for the largest lead of the night by either team at 28-14.

Ole Miss came right back with a score to bring it back within seven. The Rebel defense held strong by forcing a punt and missed field goal, which gave Matt Corral time to get going and tie the ballgame at 28 with a 16-yard strike to Jonathon Mingo.

The Kentucky offense followed its third quarter woes with a turnover-on-downs, and the Rebels capitalized with a three-play touchdown drive to take a 35-28 lead.

The Wildcats used a six-minute drive to tie the game up, which would inevitably be the score that sent the game to overtime.

Kentucky only needed three plays to score on the opening drive of the extra period, but a missed extra point would be the dooming factor for the Wildcats.

Ole Miss was aided by a pass-interference in the end zone. On second-and-goal, Matt Corral found Elijah Moore from three yards out, which was followed by the game-winning PAT by Luke Logan.

The win snapped a six-game skid of overtime losses by the Rebels.

The win moved Ole Miss to 1-1 on the season with a home bout against #2 Alabama next up on Saturday.