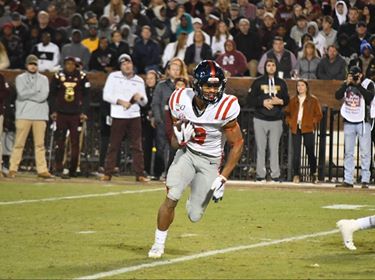 When Jerrion Ealy committed to the Rebels last February, fans were ecstatic about the amazing plays and honors Ealy would produce as a five-star running back.

As a freshman last season, the Jackson Academy native lived up to all those expectations and possibly more as Ealy was named a first-team all-SEC offensive and special teams pick by Athlon Sports.

This pick comes against some excellent competition, especially on the offensive side with Kylin Hill and Najee Harris being two of the top returning backs in the conference as well.

Along with that, he also was named to the official watchlist for the Paul Hornung Award, which is given annually to the most versatile player in college football each year.

The press release for Ealy’s selection to the watchlist can be found below.

Ealy native earned Freshman All-America accolades from several media outlets (247 Sports, Athlon, Pro Football Focus) in 2019, while also collecting All-SEC and Freshman All-SEC honors. Ealy, who is also on the Doak Walker Award watch list for this season, finished second on the Rebels with 722 rushing yards on 104 attempts for a team-best 6.9 yards per carry. He also found the end zone six times on the ground, the second-most rushing touchdowns by an freshman in school history. Along with racking up three rushes for 50+ yards, the Walnut Grove, Mississippi, native was dangerous as a kickoff returner. Against Southeastern Louisiana (Sept. 14, 2019), Ealy tallied 273 all-purpose yards with the help of his 94-yard kickoff return for a touchdown. The all-purpose yards set an Ole Miss freshman record and was fourth-most by any Rebel. Adding a touchdown on the ground, he became the first Rebel to record a kickoff return and rushing TD in the same game since 1999.

The 2020 Watch List is comprised of 50 players – 18 seniors, 22 juniors, nine sophomores and one grad transfer who play a total of eight different positions. These players represent 50 universities located in 28 states coast-to-coast that are part of the NCAA Division I Football Bowl Subdivision. All 10 FBS conferences and one independent school are represented on the Watch List; the SEC leads the conferences with eight players, followed by ACC with seven players and the Pac-12 and MWC with six players each.