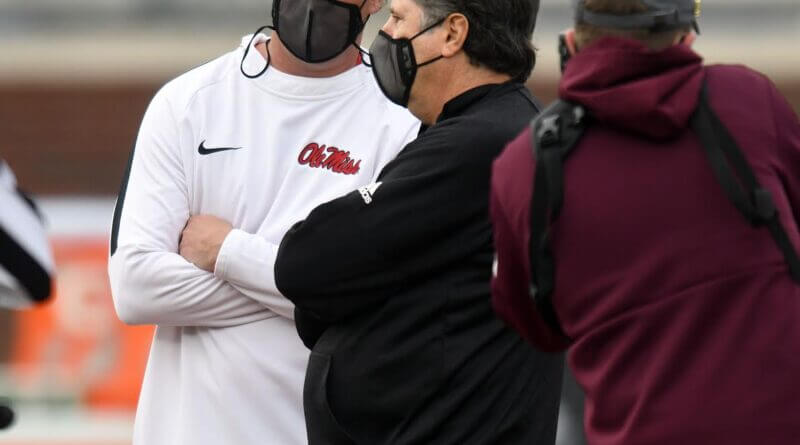 Egg Bowl 2020 came down to the last play of the game. Mississippi State (2-6) had the ball with less than 10 seconds to go. Freshman quarterback Will Rogers gave it all he had and threw up a Hail Mary but a continent of Ole Miss Rebels were in the end zone and managed to break up the potential tying touchdown catch.

The Bulldog defense made a decisive stance in the Rebel opening possession by keeping Ole Miss from scoring while in the red zone.

On the Rebels’ next possession, Dontario Drummond scored on a 48-yard touchdown pass for the 7-0 lead.

The Bulldogs were threatening to score when Rogers completed a pass to Austin Williams. As the possession played through, as Williams turned to go into the endzone, Ole Miss’ Tylan Knight forced a fumble on the Ole Miss one-yard line. Deane Leonard of Ole Miss picked up the ball and returned it to the Bulldog 16-yard line.

On the Bulldog next possession, the quarter ended after a 44-yard reception from Rogers to Jaden Walley to the Ole Miss 31. Malik Heath scored on a six-yard pass from Rogers. Brandon Ruiz’s kick cut the Ole Miss score 14-7.

In the middle of the second quarter, Ole Miss scored on a quick pass for an 81-yard touchdown reception to take a 21-7 lead.

Mississippi State seemed to know it was important to make something happen before they left the field for halftime. Rogers and company started on their own seven-yard line and drove down the field with 3:09 left in the half. drive was aided by a 29-yard pass from Rogers to Walley. Then a couple of plays later, Rogers connected with Austin Williams for 12 yards to the Ole Miss 23. Heath completed the drive on an 11-yard touchdown reception with :06 left in the half. Ruiz’ kick cut the score to 21-14 Ole Miss.

Third quarter was a defensive battle for both teams as they allowed no score.

Fourth quarter was a different story. Ole Miss kicked a 26-yard field for a 24-14 lead.

Mississippi completed a 10-play, 75-yard drive with a seven-yard pass from Rogers to Austin Williams to cut the score 24-21.
Ole Miss answered with an eight-yard rushing touchdown to go ahead 31-21. MSU cut it to a one-possession score with a 25-yard Ruiz field goal with 2:08 remaining in the game.

Ole Miss punted the next possession and MSU took it on the 15-yard line and drove to the 36 where Rogers tried the hail Mary to Walley.

The Bulldogs had a total of 479 offensive yards. Ole Miss had 550 total yards including 387 passing yards.

Next Saturday’s Missouri at Mississippi State football game was among three Southeastern Conference matchups originally scheduled for Dec. 5 that will now be rescheduled for a date to be determined, the SEC announced Friday.

The game was postponed for the purpose of facilitating the rescheduling of the Alabama at LSU and Arkansas at Missouri games from earlier this season. This rescheduling of games allows for the continued opportunity for all 14 SEC teams to play all of its 10 games in the 2020 season. The revised schedule is contingent on the absence of additional postponements prior to Dec. 5.

As additional information is released, it will be communicated to original ticket holders via email to the email address on file.

The following games were originally scheduled for Dec. 5 and will now be rescheduled:
• Alabama at Arkansas
• Ole Miss at LSU
• Missouri at Mississippi State