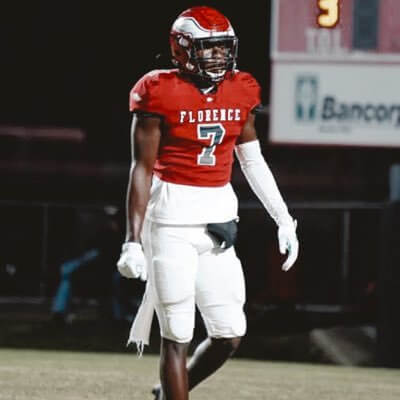 Zakari Tillman is a straight up dawg on that football field. Get out of his way or get dealt with. The 6’2″ 225lb safety out of Florence has got to be one of the best athletes in the whole state. Last year he had 566 receiving yards, 798 all purpose yards,1 int and 39 tackles. He received an offer from Southern Miss last week. Alcorn has offered him as well.

Tillman is another one of the guys that pass the eyes test. He has a very nice frame and you can tell he hits the weightroom hard. To go along with that this kid can actually play the game. Zakari is a kid that can dominate the game as well. Whether he is on offense or defense he is a complete game changer.

His film speaks for itself. This kid is all over the field making plays. On the offensive side he can really hurt you on the jump ball play. He goes up and gets it at the highest point. When he catches the ball he is a very mean guy and don’t many want to tackle him.

On defense he puts me in the mind of Sean Taylor at safety. This guy will knock your block off. I don’t want to be a running back making a cut and he has a head full of steam on me. He is a mean hitter. At LB he is very solid too. He can shed blocks and get to the running back. He also reads keys very well.

Zakari does a good job at corner. Especially in zone. He does great making sure he covers his assignments. In cover two he is a guy that covers the flats to the t. He makes sure that nobody gets by him when they catch a short pass.

I think Zakari is one of the best players in the state. There aren’t many bringing what he brings to the game every week. There are some with better stats, but if you look at how much Zakari does on the field you can’t deny him. He is clearly an athlete.

“I’ve been working on my speed and safety skills,” said Zakari. “I’m real long so it’s harder for me to get low on my back pedal. I’m working on exploding out of my break.”