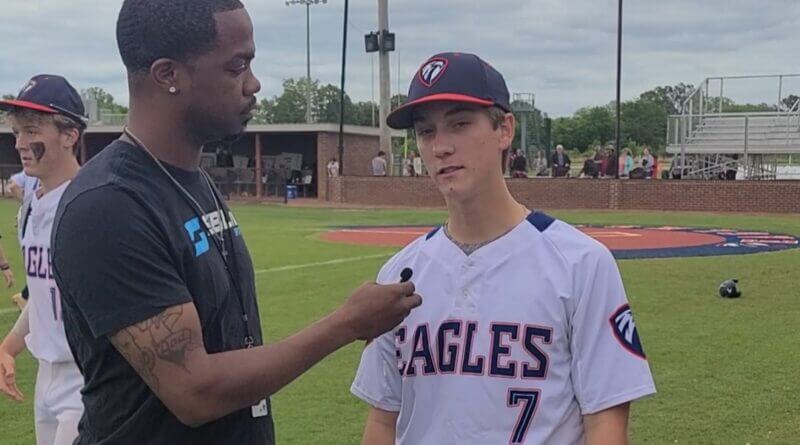 Jacob Tackett was on fire from the mound today and didn’t allow a single run as Tupelo Christian beat Biggersville 10-0 today. The tables turned quickly from Friday night. “Last night didn’t go the way we wanted it to, but tonight was a different story,” said Jacob.

Tupelo — Both teams went scoreless in the first inning and it seemed we would have a good game. It would change very fast at the beginning of the second. The Eagles went up 3 to 0.

A good solid hit by Bubba Harris in the third would result in a single and it almost was the spark to help Biggersville rally. It just wasn’t enough. Tupelo Christian got the outs from the field and got right back on the sticks.

“Focus. Today we were focused. Last night they jumped out on us,” said Coach Holliday. “Today we came out swinging the bats and capitalized on their mistakes early.”

The fifth inning came and Tupelo Christian picked up two more singles. A nice basehit over the gap between second and third resulted in another run that ended the game.

It just wasn’t Biggersville night. They only got two hits tonight and had two very costly errors. Overstreet pitched 4.2 innings and allowed ten hits. The two teams will be in action again Monday for game three.

“This is TCPS baseball. We have great fan support. Our school gets behind us and our fans get behind us,” said Coach Holliday. “Monday we got to bring intensity. We got to throw strikes. We aa going on the road so we got to take their crowd out of the game early. Long as we can play our baseball I feel we’ll be ok.”