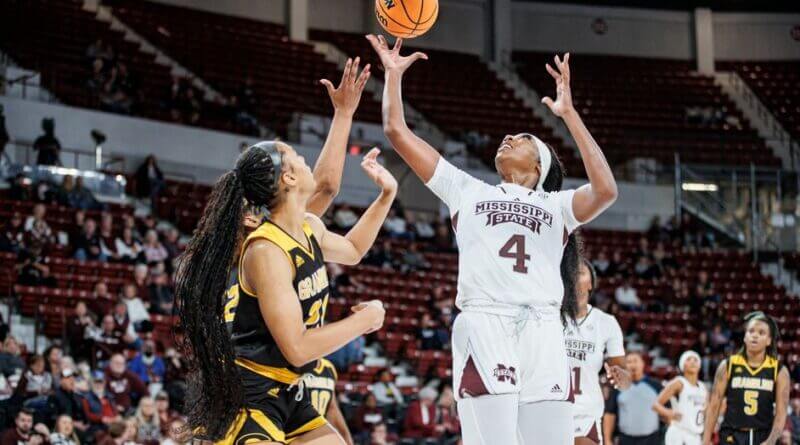 Mississippi State women’s basketball earned its seventh victory of the season on Sunday after defeating Grambling State 73-47. The win is the Bulldog’s second straight after returning from their Thanksgiving trip in Puerto Rico.

Mississippi State prevailed over Grambling State to stay in the win column. State shot 38 percent from the floor but, thanks to solid effort in the paint, were able to outscore the Tigers 34-12. The Bulldog’s defense came to play, tying a season-high with 16 steals and 23 total turnovers. MSU turned those 23 turnovers by Grambling in 27 points.

Debreasha Powe led the way, scoring a season-high 19 points. Powe shot 6-for-8 from the field and 2-for-4 from the three-point line in the first half. Jessika Carter earned her 21st career double-double with 15 points while leading the team with four blocked shots and grabbing a season-high 14 rebounds.

Making her first start of the season, Denae Carter recorded her second double-double of the season, the sixth of her career, with 15 points and 11 rebounds. Mississippi State had four players score in double-figures, Powe (19), Jessika Carter (15), Denae Carter (13) and JerKaila Jordan, who added 11. This was the sixth game this season with at least four players scoring in double figures.

Trailing 8-4 midway through the first quarter, Mississippi State went on an 11-0 run to take a 15-8 lead. JerKaila Jordan started the run with a triple before Debreasha Powe, and Jessika Carter traded layups. State wouldn’t surrender the lead the rest of the way and extended their lead to as many as 30 in the fourth quarter.

• State outscored Grambling 22-7 in the second. It was the ninth quarter this season that MSU has held its opponents to single-digit points.

• MSU’s bench was outscored 28-11. Just the second time this season that State has lost the bench points battle.