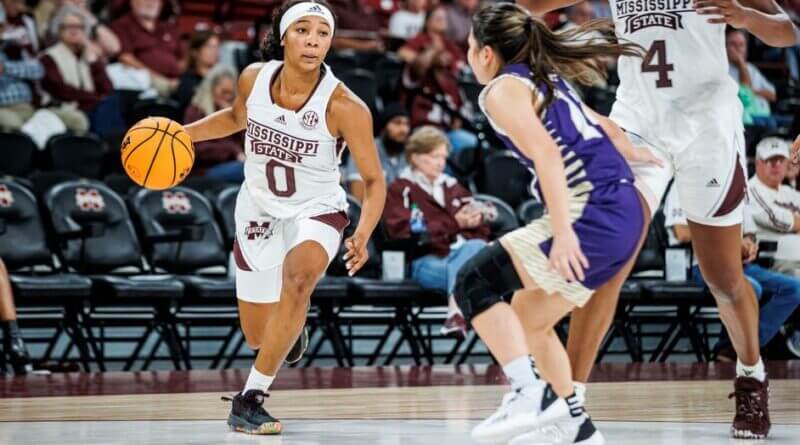 Mississippi State women’s basketball fell for the first time during the 2022-23 season after dropping a heartbreaker at South Dakota State Monday night. Anastasia Hayes scored 15-points in the contest and reached the 2,000 career points milestone.

Playing their third game in six days, the Bulldogs fell to South Dakota State 63-62. Despite Anastasia Hayes, JerKaila Jordan, Debreasha Powe, and Asiana Johnson each scoring in double digits on Monday, the Bulldogs struggled on offense, only shooting 38% from the field and 25% from the 3-point line. Ahlana Smith and Jessica Carter fouled early in the fourth quarter when 5-points separated the game.

The Bulldogs had four players (Powe, Jordan, Anastasia Hayes, Johnson) score in the double digits. Powe recorded the second double-double of her Bulldog career, scoring 15 points and 10 rebounds. Ramani Parker led on the glass with 11 rebounds, with Powe following closely behind with 10. Powe and Anastasia Hayes led the team with 15 points a piece.

“It’s a huge one. It could’ve been easy in my first year to push them off another year, but this is a special place. I think me and Kelly were talking about it; they’ve only lost seven games; you might have to fact-check me on that, but in 2017 it’s like eight or nine or 10 games they’ve only lost. They don’t lose here, and it’s because of their crowd; it’s a special environment for women’s basketball. It’s loud, they have the band right beside our bench, which is very unique so the huddles are everything. We put words up about being tough, but I was glad because when things went bad for us, because Ahlana is a big part and Jessica obviously, when they went out, other people had to take on other roles and they did. It’s again I think a team that can make the sweet sixteen, elite eight this year.”