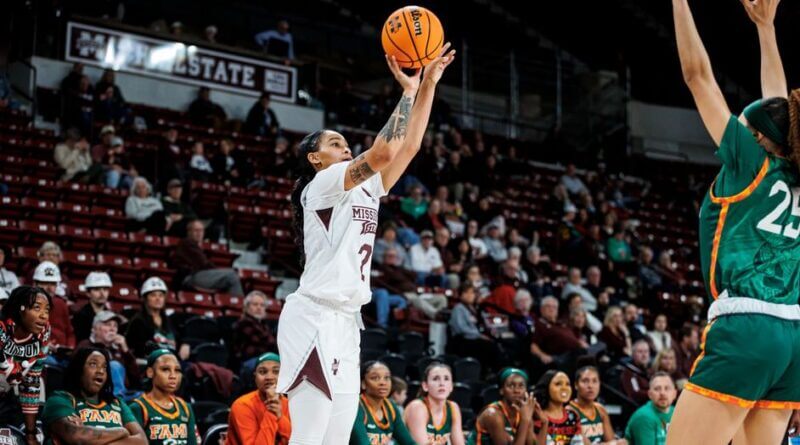 Leading by just five at halftime, Mississippi State women’s basketball used a huge second half to earn a dominant 87-58 victory over New Mexico in the final game of the Sun Coast Challenge. The win improves MSU’s record to 11-2 on the year entering SEC play.

JerKaila Jordan recorded her 1,000th career point with a jump shot at the top of the key against New Mexico. Jordan had a solid day all-around with 17 points, four rebounds, two steals, and three assists. She went 7-for-15 from the field and 2-4 from the three-point line. Jordan became the second Bulldog this season to reach a significant milestone, joining Anastasia Hayes, who scored her 2,000th career point earlier this season.

Mississippi State closed its non-conference schedule with an 87-58 victory over New Mexico in the Sun Coast Challenge, finishing the tournament 2-0. The Bulldogs outrebounded New Mexico 53-36 and outscored the Lobos 48-14 in the paint. This was just the second game for MSU that they have eclipsed 50+ rebounds. State had four players scoring in double-figures, Jessika Carter (29), JerKaila Jordan (17), Anastasia Hayes and Ahlana Smith (11).

Jessika Carter had a day to remember with a season-high 29 points, 10 rebounds, four assists, and two blocks. Carter recorded her 24th career double-double and her first 20-point game of the season, the ninth of her career. Carter led the team in shooting at 77% (14-18) from the field.

Turning Point
The Bulldogs ended the second quarter on a 6-0 run shifting the momentum State’s way going into halftime. Coming out of halftime State shot 50% from the field in the third quarter and 61% in the fourth, improving from 38.9% in the first and 43.8% in the second.

Game Notes:
• New Mexico made 12 triples to MSU’s seven
• Bulldogs shot 60% (3-5)from the three-point line in the second quarter
• JerKaila Jordan and Jessika Carter leading the team with eight points a piece at the half
• Bulldogs ended the third quarter on a 13-2 run
• This was MSU’s fourth straight game shooting above 45% from the floor
• Despite 16 lead changes, MSU held the lead for over 29 minutes