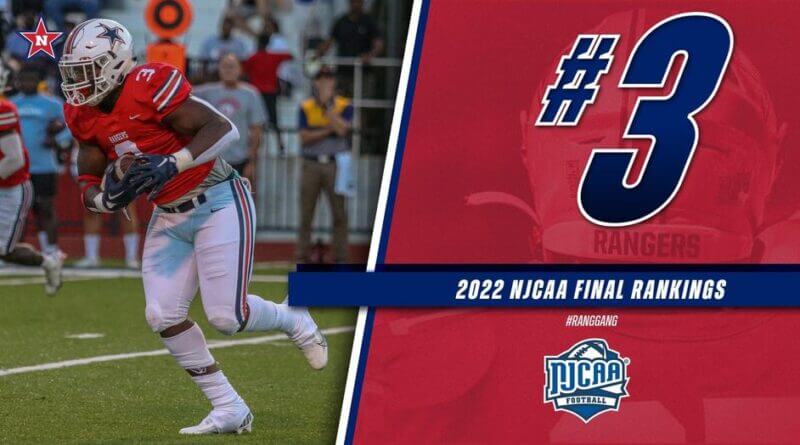 Despite enduring a season-ending loss in the NJCAA Semifinals earlier this month, Northwest was still highly-ranked to finish out the 2022 campaign.

On Monday afternoon, the NJCAA announced its final rankings for the 2022 season and the Rangers checked in at No. 3 overall, marking the seventh time in the last eight seasons that Northwest has finished in the Top 10 of the organization’s postseason rankings.

Eventual champion Iowa Western earned the No. 1 national ranking after defeating previously-unbeaten Hutchinson (Kan.) in the NJCAA Championship last week. The Blue Dragons dropped to No. 2 with the loss, while Snow College (Utah) overtook Coffeyville (Kan.) for the No. 4 spot.

Elsewhere in the MACCC, East Mississippi finished sixth in the nation, followed by Jones College at No. 8 and both Pearl River and Mississippi Gulf Coast unranked, but receiving votes.

Northwest sported a 10-2 record this season and a perfect 6-0 mark in MACCC North Division play, earning the program’s first 10-win season since 2015. That year, the Rangers went on to win both the MACJC and NJCAA championships.

Northwest has now finished at or near the top of the final rankings in seven of the last eight seasons, dating back to 2015. The Rangers were No. 1 in the nation to conclude 2015, sixth in both the 2016 and 2019 seasons, seventh in 2017 and 2018, and No. 4 to end the 2021 campaign. Additionally, Northwest also finished the 2020 season at a perfect 6-0 and won the National Community College Football Championship, unaffiliated with the NJCAA.

Since Benjy Parker took over the head coaching reins in 2016, the Rangers have compiled a 58-16 overall record and a .784 winning percentage. Parker has further cemented his spot as the Rangers’ second winningest coach, trailing only Bobby Franklin’s 201 victories that were collected over a span from 1981-2004.

In that timeframe, Northwest has made the MACCC Playoffs every year and has played in the conference title game every season except 2018. The Rangers have also competed in the NJCAA Division I Playoffs, the National Community College Football Championship or an NJCAA bowl game in five of Parker’s seven seasons.

Parker’s staff has also sent a total of 119 players to the four-year level, with 93 of those signing with FBS or FCS programs at the Division I level. That number is expected to grow tremendously this season, with numerous Northwest sophomores offered or committed to programs such as Washington State, NC State, Arkansas State and Middle Tennessee, to name a few.