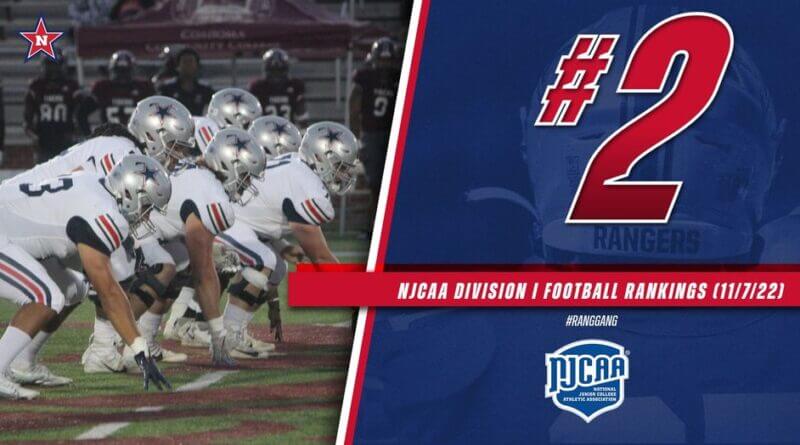 After rallying from a 35-17 deficit in last weekend’s semifinal matchup against Jones College, Northwest has risen a spot in the national rankings ahead of this Saturday’s MACCC Championship showdown against East Mississippi.

Northwest now sits at No. 2 in the latest rankings, announced Monday afternoon by the NJCAA. The Rangers (10-0) were also aided by Iowa Western’s 23-7 loss to Coffeyville (Kan.), dropping the Reivers from No. 2 to No. 4. Hutchinson (Kan.) remained No. 1, while Trinity Valley (Texas) ascended from fourth to second.

This week’s poll marks the first time that the Rangers have moved in the rankings since October 10, when Northwest inched up from fourth to third. The Rangers received 140 points in this week’s rankings, only 10 less than No. 1 Hutchinson.

After its semifinal victory at Mississippi Gulf Coast, East Mississippi (7-3) also moved up two spots from No. 14 to No. 12 overall. Jones College was the only other MACCC team ranked this week, sliding from seventh to No. 10 following the loss to Northwest over the weekend.

Along with the long-anticipated Hutchison-Iowa Western matchup, a lot of eyes will be fixated on what takes place at Bobby Franklin Field this Saturday against the Rangers and Lions. Northwest defeated EMCC earlier this season, 38-21, in what was then a Top 10-matchup in Scooba on September 29. The Rangers lead the all-time series 43-26-1.

However, beating East Mississippi a second time will not be an easy task by any stretch. Since losing to Northwest, the Lions are 4-1 and have won three straight games by a combined 139-51, including a 63-14 blowout of Mississippi Delta. EMCC is currently averaging 36.4 points per game, with 408.7 yards of total offense, including 256.4 passing yards per game.