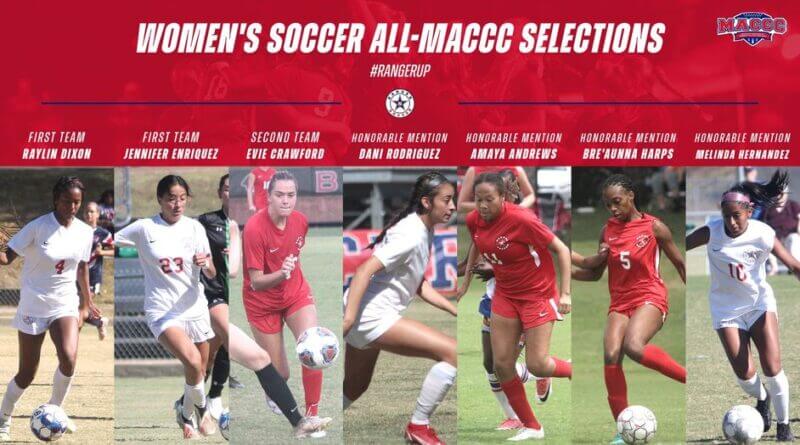 Following another historic season that saw Northwest reach the Region 23 Semifinals and earn its first-ever bid into the NJCAA Division II Women’s Soccer Championship, a record total of seven Lady Rangers have been chosen for All-MACCC recognition, the conference announced on Wednesday morning.

After shattering the single-season and career assist records in her freshman season, Enriquez picked up right where she left off, adding 10 goals and nine assists to her sophomore season stats. The Las Cruces, N.M. native scored a pair of goals in victories at Southwest Mississippi and against Meridian this season, helping run her career total to 22 goals and 29 assists for a total of 73 career points.

Though she hasn’t recorded many stats as a defender, there was no denying Dixon’s ability as a lock-down defender. With the help of her teammates on the back line, the Lady Rangers have only allowed five goals so far this season, the least amount of goals surrendered in a single season. The Brandon native did score a goal in the season-opener against National Park College and also provided an assist in a 9-0 conference victory against Hinds.

Crawford undoubtedly made a splash in her freshman season with Northwest, finishing as the team’s leading scorer in the regular season. The Tupelo native totaled 11 goals with five assists, highlighted by an eye-popping five-goal performance in the Lady Rangers’ 9-0 victory against Hinds on September 27. The performance earned her MACCC Offensive Player of the Week accolades, while also becoming the first Northwest player to score five goals in a single match since September 26, 2006 (Elyse Lovelace vs. Southwest Mississippi – W, 16-0).

Rodriguez has been another reliable option up front, scoring five goals and seven assists as the team’s fifth-leading scorer. The Hobbs, N.M. native has played in all 17 matches with six starts.

Andrews and Harps have also played a pivotal role in the Rangers’ defensive efforts this season. Additionally, Andrews has contributed a pair of assists in victories against National Park College and East Central, while Harps also provided two assists in wins against Hinds and East Central.

After earning First Team All-MACCC accolades last season, Hernandez followed up her five-goal freshman year with five more goals on three assists this season. She notched her best performance of two goals and two assists in an early season victory at Southwest Tennessee on August 30, while currently sitting at 10 goals and 11 assists for her career.