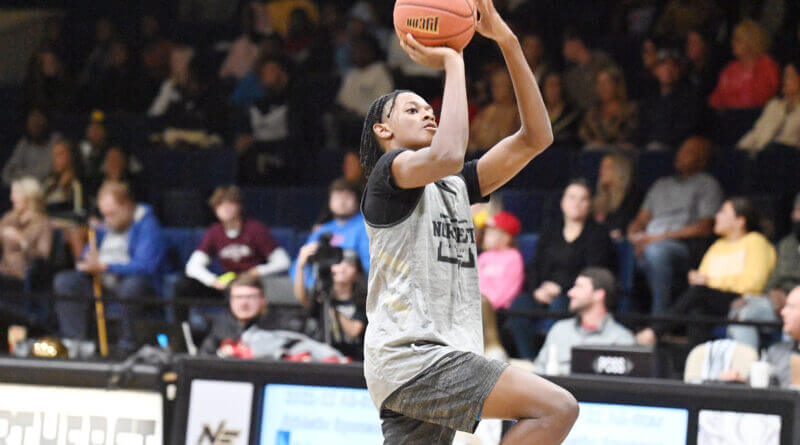 Trey Tate showed no signs of an athlete that had not played in an official basketball game in some 19 months.

Tate scored a team-best 21 points as Northeast Mississippi Community College got its 2022-23 campaign underway with a 91-81 win over Volunteer State (Tenn.) Community College on Saturday, November 5 at the Pickel Field House.

“(My teammates) found me. They gave me the ball and I knocked them down,” Tate said. “It felt good coming out and making shots. This is a good dub and a good learning experience.”

The Germantown (Madison) High School graduate took a redshirt during his inaugural year on the Booneville campus. Tate made his first shot as a Tiger and never looked back by going 7 of 9 from the floor, including a 4 of 6 showing from long distance.

“Honestly, it doesn’t shock me that he scored because of the way he’s been playing in the preseason,” said Northeast head coach Cord Wright. “We plugged him in the starting lineup over the last week. He’s responded and given us no reason to take him out.”

Tate was one of seven Tigers to make their debuts against the Pioneers. Corey Stephenson led the group of true freshmen with 20 points and six rebounds in a team-high 36 minutes of action.

Northeast, which appears at No. 21 in the preseason National Junior College Athletic Association (NJCAA) Division I poll, trailed early after Volunteer State made five three-pointers in the first six minutes.

The Tigers (1-0) finally took their inaugural lead of the matchup at 24-23 with just over nine minutes remaining before the intermission following an offensive rebound and putback by Keithean Brooks.

Northeast used a 10-0 run moments later to jump ahead by a 36-28 margin. Isaiah Regular christened the spurt with a layup that was assisted by Allen Hughes while Stephenson and Tate combined for the remaining eight points.

The Tigers pushed their advantage to double-digits for the first time moments later at 40-30 after a pair of Tate free throws. Northeast eventually took a 47-34 lead into the locker room at halftime.

The Pioneers (0-2) made things interesting late after cutting their deficit to 81-80 with 2:48 remaining in the contest. However, the Tigers scored 10 of the final 11 points to secure a hard fought victory.

This was Northeast’s ninth consecutive season opening triumph dating back to 2014. It was the first time that the Tigers started a new year on the road since visiting Dyersburg State (Tenn.) Community College during Wright’s inaugural campaign.

Jalin Rice and Brooks were sensational for Northeast as well. The sophomore duo combined for 28 points while Brooks approached a double-double with a career-high nine rebounds.