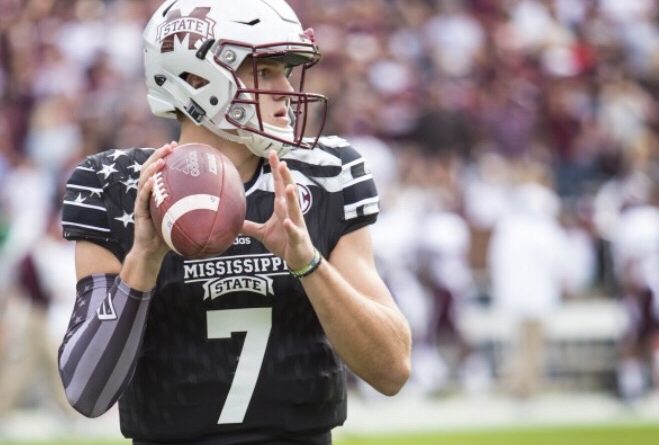 After going on the road to Kansas State and winning 31-10, the Bulldogs return home for a non-conference tilt against the Louisiana-Lafayette Ragin Cajuns. The Cajuns come to Starkville after a week off and a win in week 1 over Grambling State 49-17. Former Ragin Cajun head coach Mark Hudspeth is on the Mississippi State coaching staff as tight ends coach, while former Mississippi State offensive lineman DJ Looney is on the ULL coaching staff as offensive line coach.

Matchup to Watch: Last week, Mississippi State struggled getting the passing game going with QB Nick Fitzgerald only completing 11/27 passing. Fitzgerald, a fifth year senior, returned last week from injury and couldn’t shake off the rust throwing for only 2 touchdowns and also throwing an interception which set up a Kansas State field goal. The matchup to watch on Saturday night will be Mississippi State’s vertical passing game against Louisiana Lafayette’s defensive backs. If MSU can get the passing game rolling before next week’s matchup at Kentucky, it will just add another layer of MSU’s offense for opposing defenses to defend against.

Louisiana-Lafayette Player to Watch: Sophomore running back Trey Ragas ran the ball 13 times for 142 yards and 1 touchdown. For the Cajuns to have any chance at pulling the upset on Saturday, they’re going to have to run the ball and run it effectively against a very deep and talented Mississippi State defensive line. That will be a tall task because Mississippi State is only allowing 95 rushing yards through 2 games. ULL’s line will need to control the line of scrimmage and provide running lanes for Ragas if the Cajuns plan on staying competitive on Saturday, let alone pull off a huge upset.

Mississippi State Player to Watch: As stated in the match-up to watch, it’s not a secret that State fans and coaches will be paying close attention to QB Nick Fitzgerald on Saturday. The big question coming into the season was will Fitzgerald be able to throw the deep ball and do so effectively. Last week at Kansas State, he couldn’t connect with his WRs whether he over threw them or they dropped the ball. It’s going to be key for Fitzgerald to be able to throw the ball effectively down field on Saturday, just to give State fans some confidence that he can do so if the offense ever needs the deep ball.

Prediction: I expect this game to be closer than most expect early on, but it will still be a lopsided score when clock hits zero. With State needing to throw the ball and wanting to work on the passing game a little more this week, the score really won’t tell the story of this one. The defense will do its job to keep Louisiana-Lafayette off the scoreboard early on, which will provide more time for State to throw the ball as much as it wants to. Expect this game to be close in the first half but the Bulldogs will pull away in the second half to win big, 52-10.