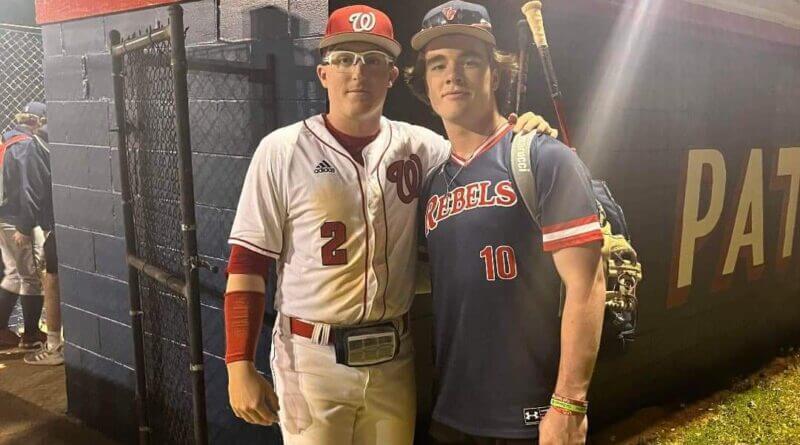 Two future Bulldogs faced off on Monday, with Class of 2022 star and Dandy Dozen, Aiden Fancher, from Winston Academy faced off against Class of 2023 star pitcher Riley Myers, from Leake Academy. While Fancher is known for being a star at every position, Myers is being recruited for his incredible talent on the mound. However, due to an injury, Myers played center field and Winston took advantage, winning 12-2, in six innings.

The two future bulldogs seem to be looking forward to their time together in Starkville, however it isn’t the first time they have been teammates. Myers says they have played together since the age of nine. “He’s always been a good teammate”, Myers said, “ Having the thought of him being a teammate in recent years is gonna be pretty awesome”. Fancher had good things to say for Myers as well. Fancher said Myers was a “ good competitor ” and a good teammate” and that they will do whatever they can to help the team. Starkville has a lot to look forward to in these next few years.

Bryce Watkins took the mound instead of Myers and struggled early. Watkins walked his first two batters, Max Fulcher and Trey Williamson who both advanced on a passed ball when Fancher was at bat. Fancher then grounded out on a close call at first, scoring Fulcher and Williamson advanced to third. The next batter , ECCC commit Brylee Wall did the same to score Williamson. Winston led 2-0 after one inning. The uncommitted star, Dalton Powell took the mound for the Patriots and the Rebels could hardly do anything with him. Powell put up yet again another impressive performance only allowing four hits through six innings, one of which was a missed fly ball in the first. Powell only gave up one earned run and only walked one batter, while striking out five. After a few hits and walks, Matthew Nowell came in for Watkins in the second and pitched three innings. After the second, Winston led 7-0.

The Rebels finally put themselves on the board in the third after Jake Freeny doubled to left field and was brought home on a double by Bishop Hardin. Myers then would hit a ground ball and reach on an error, bringing Hardin home to make the score 7-2.

After a good offensive series, that could’ve given the Rebels a glimpse of hope, nothing else seemed to work for the Rebels offensively. The Rebels would only record one more hit, which was claimed by Jake Freeny, with a single in the fifth. The Patriots just continued to dominate on both offense and defense as Powell was continuing to shut down Leake. The Patriots scored another run in the third, making the score 8-2.

Sophomore Jake Freeny with his second big hit of the night for the Rebels. Winston still leads 8-2 in the fifth #mhssp @MacCorleone74 pic.twitter.com/qR2u6S1dgs

In the fourth the Patriots saw a 123 inning on defense but were unable to put anymore on the board until the fifth were they scored a run with help from Brylee Wall, who singled on a fly ball, bringing Braxton Rone home. The Patriots would then end the game in the sixth, with a series of hits capped off by a walkoff single by Aiden Fancher that scored Max Fulcher.

This Winston team is incredibly loaded with talent and I will be sure to cover them again when I can. The two future bulldogs may have been the highlight, however Dalton Powell stole the show in his complete game. The low strikeout number may not show it, but you just have to see this kid on the mound. You would be making a mistake to not want this kid on your team.