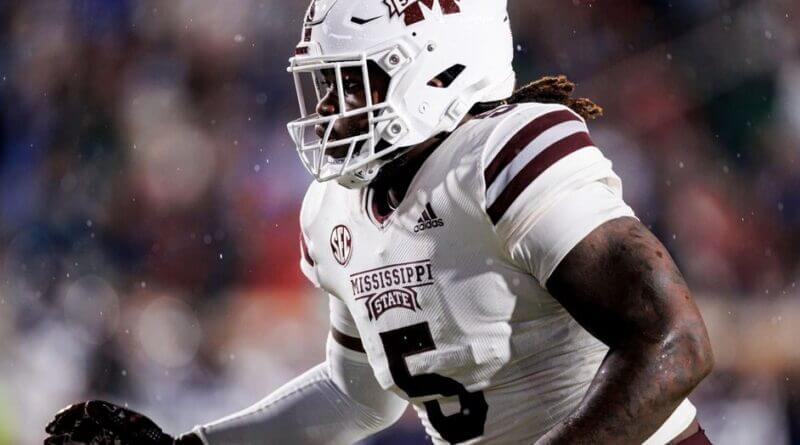 There are moments in Egg Bowl history that live forever. Among them, there’s the kick and the pick. Pegues’ punt return. Dak’s comeback. Not to mention however you want to label the 2019 game’s conclusion.

Charlton’s clutch pass deflection on a potential game-tying two-point conversion essentially sealed MSU’s 24-22 victory over No. 20 Ole Miss on Thursday night. It was a heroic play that’ll be remembered for all time.

So Randy, how does it feel to make your own legendary highlight in this rivalry?

“I really didn’t think about that – you just made me think about it honestly,” Charlton said when asked immediately after the game. “I might go cry a little bit…Nah. But it’s a surreal moment just to be able to secure that win for my team and my boys. It was just a great moment.”

Indeed it was. Without it, who knows how the 2022 meeting of the Bulldogs and Rebels would’ve played out? However, Charlton did the honors of putting the final strip of tape on the game’s Maroon and White wrapping.

Now, it wasn’t without some stress. Only moments earlier, it appeared MSU was about to put the exclamation point on a victory. State led by eight and was nearly in the end zone again before a fumble gave the football back to Ole Miss at its own one-yard line.

“I was about to have a heart attack,” State running back Dillon Johnson said of his emotions. “We had a chance down there on the goal line [to put the game away] and we didn’t finish.”

The Rebels then drove 99 yards for a touchdown, scoring with only 1:25 left in regulation.

It then all basically came down to one play. If Ole Miss could successfully convert the two-point try, an overtime situation was possibly on the horizon. If MSU could get a stop, the Golden Egg was almost assuredly headed back to Starkville.

The Rebels called a pair of timeouts before running the play. Once the ball was snapped, Ole Miss quarterback Jaxson Dart appeared to have receiver Jonathan Mingo open for a quick shovel pass with an open lane to the goal line.

With his left hand, Dart sent a pitch toward Mingo’s direction. Only problem with the play was Charlton’s right paw got in the way.

Charlton batted the football to the ground. He then picked it up and sprinted toward the State sideline in celebration.

“All I remember was seeing the ball on the ground,” MSU linebacker Nathaniel Watson said. “When I saw [Charlton] get it, I knew the game was over then.”

Now, you might wonder how Charlton was able to deliver when it counted the most. Well, it was far from coincidence. He was prepared. He’d been coached to be ready. He recognized the play immediately.

“The specific play on the two-point conversion…we practice the same play in practice 24/7,” Charlton said. “I just stuck my hand out and tried to hit the ball.”

He tried, and he did. Head coach Mike Leach wasn’t too surprised Charlton came through.

“He’s just a big strong guy,” Leach said of Charlton. “He kind of lives in a world of destruction.”

Charlton’s preparation and ability has now put him on Egg Bowl highlight reels for years and years to come. Who would’ve ever thought this Miami, Florida, native who came to State prior to last season after three years at Central Florida would suddenly find himself as an MSU hero?

“I wouldn’t have it any other way,” Charlton said. “Bulldogs, Hail State – this is my home…As soon as I got here, everyone embraced me like I was family – from the coaching staff, to the strength coaches, to the [individuals in the] equipment room. Everyone embraced me and I gave it all for them.”

Now, no Bulldog anywhere will ever forget Charlton’s name.