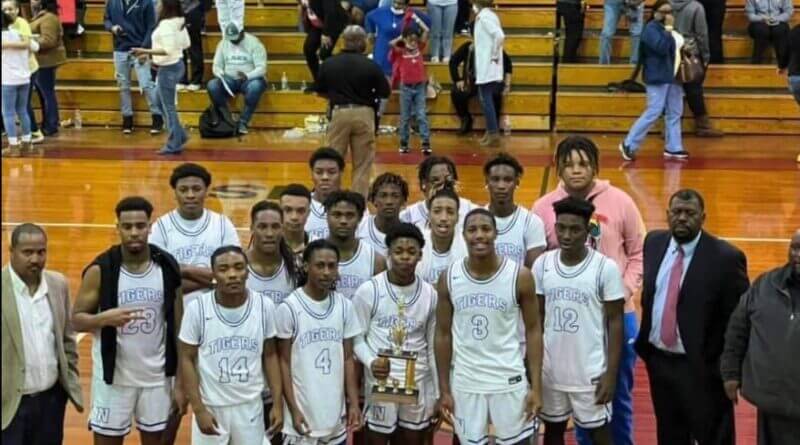 PHILADELPHIA – “This is not something we have just started. This is how we’ve been playing for two years” said Coach Crandall Porter as he and his Newton Tigers won their second consecutive District Championship on Friday, defeating the Kemper County Wildcats 58-43 in the championship game, showing everyone that they are a team to reckon with in 2A.

The Nanih Waiya Warriors and the Lake Hornets would kick off the tournament on Tuesday, battling it out for the fourth spot in the playoffs. The Warriors were able to edge the Hornets, 36-39, after Lake failed to score at the buzzer.

Defense was key for the Warriors, as they were able to limit Lakes leading scorer, Curly Robinson, to only nine points, while also fouling him out in the fourth. Nanih Waiya was led in scoring by Freshman Preston Prewitt and Senior Hagan Halfacre, who each scored 10. Prewitt also recorded 11 rebounds for the double-double.

”We did a really good job handling the pressure,” said Porter. The Tigers also put on the defensive pressure as forcing turnovers accounted for many of Newton’s points. The 11 three pointers made by Newton was another high point leading to the win as the Tigers held a 25-14 point lead after one quarter and never looked back.

Newton was led in scoring by Isiaih Johnson with 14, while Justin Thompson added 13.

Meanwhile on the other side of the bracket, the Kemper County Wildcats were battling the Philadelphia Tornadoes for a ticket to the championship game. The Wildcats and Tornadoes had split the series in the season, both games being within six. Kemper came off to a hot start, leading Philadelphia 28-19 at halftime. The Wildcats were able to hold the lead as the lead remained the same through the third and the Tornadoes were just unable to come back from behind in the end.

Kemper was led in scoring by Lebron Johnson, who scored 17. Cam Butler, Ty Steele, and Adian Burrage all scored six.

In the Championship game, It was the Tigerś Dominant second half that pushed them to the win. After only leading 22-21 at halftime. The Tigers outscored the Wildcats, 22-12 in the third and 14-10 in the fourth to push the lead to 15.

Coach Porter said that handling the pressure well is how the Tigers were able to push the lead as far as they did.

Rayvion Nettles led Newton in the championship with 15 points. Johnson had another great performance with 14. While holding the top seed in playoffs Newton will host Pisgah in the first round of the playoffs.

“We’re going to take it one game at a time”, said Porter, as he says the goal is to be back in the State championship game.