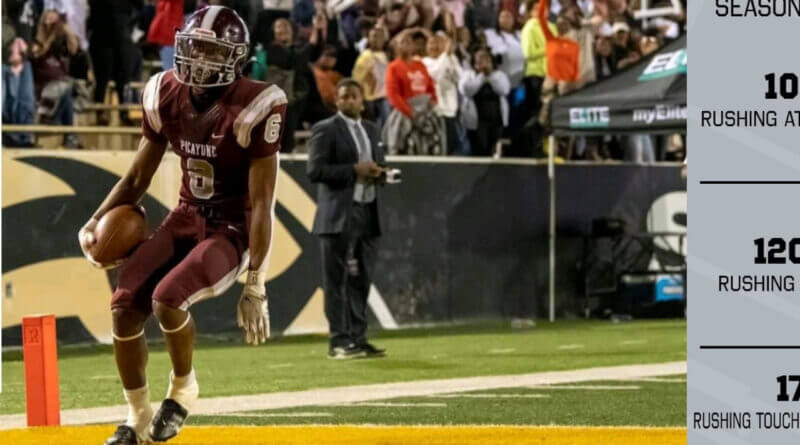 Check out the MHSSP App Here

West Point — The 2024 Picayune Maroon Tide super talent Chris Davis received his first offer today from Florida State. What better way to start out receiving offers is there than receiving one from a power 5 school? The 6-0 175 lb running back/cornerback was amazing back in December. He scored two touchdowns and rushed for over 100 yards in their victory over West Point. Davis finished the year with 107 rushing attempts 1200 yards and 17 touchdowns. He was well known in the southern MS areas, but the state game is what put him on the map all over the state.


Chris brings a lot of speed to the backfield and is a major complement to Dante Dowdell. To be more accurate they truly complement each other.


Davis is also a very good defensive player. In my opinion I think we will see him play defensive back on the next level. However with him only being a sophomore right now it is too early to tell.

Chris Davis is also a scholar athlete with a recorded 3.7 GPA.

Here is what he had to say in our interview with him earlier!

How does it feel to have your first offer?

It’s incredible and I’m extremely blessed to have the opportunity to receive this offer .

What position do you want to play at the next level?


Preferably I’d like to play running back, but it doesn’t matter.  I just want to help a team win.


Who are some players you study?


What do you think your team can improve on to make sure y’all get back to state?


We just need to keep growing as one and keep having each other backs like we been doing. The sky’s the limit.

Have you been in contact with any other schools?


Yes sir. I had Boston College contact me. FSU just gave me my first ever offer. It just feels so surreal because this is what I’ve been dreaming about since I was younger. I can see it coming true and turning into reality.


What are some areas of your game you would like to work on?


I’d like to better my craft in every aspect of the game. I will never settle cause I always can get better at running back & corner. I want to be an overall athlete.


Chris Davis definitely has a bright future ahead of him. I was able to watch him at the Heat 7v7 tryout this summer where he and a few more teammates showed up to tryout for the summer program. There he worked more on the defensive side of the ball. He has nice feet, good hips and great instincts.


He will be featured in our top 20 junior series we drop later this year. After flying under the radar all of last season we look for him to be a bigger name across the state these next two years.


I think if he gains more weight and speed we are looking at a kid that is ready to contribute as a freshman. On top of all of his attributes he is tough and gritty. Two traits you need playing college football.


To some stars don’t matter and Chris doesn’t have any at the time. Over the summer and remainder of his high school career he will gain more stats. He will be attending the Rivals camp this year and there I’m sure he will impress the scouts and gain his first star. Can’t wait to see him play this year.