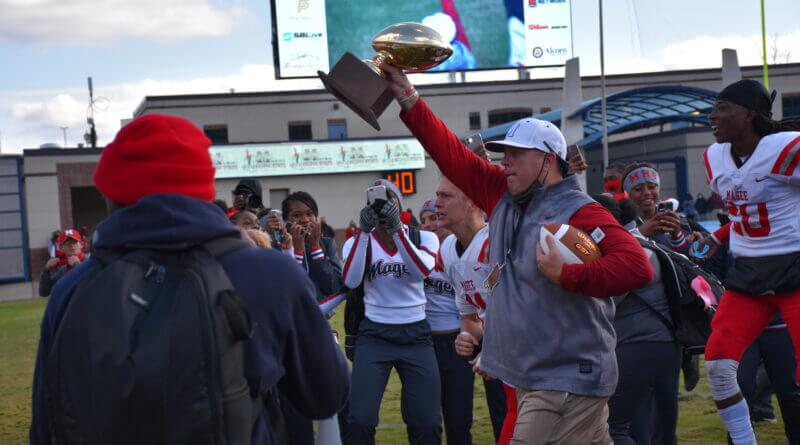 JACKSON — As the Trojans ran back into the locker room after Friday’s state championship, a player told a crowd of media members: “We’re not done yet, we’re just getting started.” What a beginning it was.

Magee quarterback Chandler Pittman scored early and often to knock off the Noxubee County Tigers 49-26 for the Class 3A State Championship at Mississippi Veterans Memorial Stadium on Friday. The Trojans capped off a perfect 12-0 season en route to the school’s fifth state championship, their first since 2000.

“Unbelievable,” Magee head coach Teddy Dyess said. “These kids battled through adversity all year, despite Covid and everything going on, not going whether we were going to play or not. These kids never flinched nor hesitated. They have high character and it showed today.”

Pittman accounted for five total scores, two on the ground and three through the air. He completed 15 of 28 passes for 158 yards while rushing 23 times for 192 yards. Four of those scores came in the first half alone.

“He’s not a Dandy Dozen, he’s not an MS/AL all-star, but I’ll take him any day of the week,” Dyess said.

It was a back-and-forth affair for the majority of the first half. Neither team willing to give in. Noxubee County got on the scoreboard first with a touchdown pass form Chrishad Rupert to Antonio Fowler midway through the first quarter. Following a failed two-point conversion, Magee responded with a touchdown pass of their own and never lost the lead since. The Tigers would be play catchup for the rest of the first half, until momentum swung solely in Magee’s favor, despite Tiger quarterback Chrishad Rupert, who finished completing 24 of 37 passes for 308 yards and two scores through the air.

With 44 seconds left in the first half, Pittman rolled out and decided to call his own number, giving the Trojans a 28-20 lead going into the locker room. Magee consumed clock to begin the third quarter. Pittman covered 50 yards worth of ground just to get a 10-yard touchdown pass to Kyerston Tucker.  The game snowballed from that point on.

“We’re in Region 8-3A, every Friday night is a gauntlet. It prepares us for games like this,” Dyess said. “Unbelievable community, these guys have stuck with this team the whole day. They were hungry. They waited 20 years for this.”