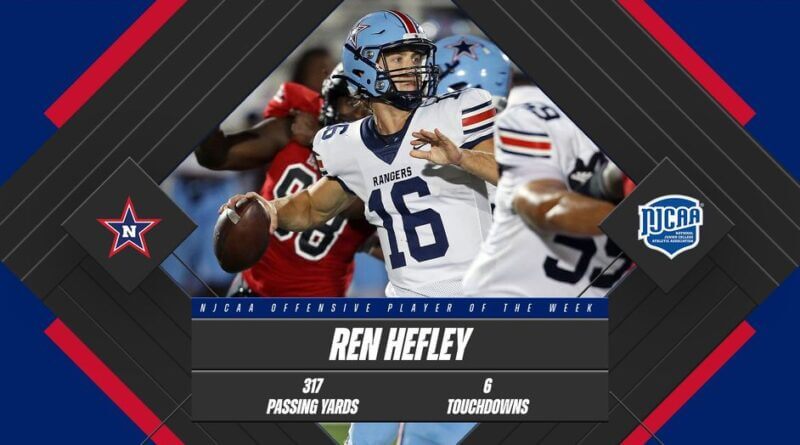 Within a 24-hour span, Northwest quarterback Ren Hefley has been the recipient of three national Player of the Week awards, the most recent coming Wednesday afternoon from the NJCAA.

Hefley was awarded POTW recognition on Tuesday morning by the MACCC and later garnered the same award from JUCOWeekly.com and NJCAA Division I.

Hefley, a Little Rock native and a transfer from Presbyterian College, posted his career-best performance last Thursday in a 44-21 victory at Coahoma. He completed 20 of his 27 pass attempts and passed for 317 yards, while also becoming only the fourth Northwest quarterback ever to pass for six touchdowns or more in a single game.

Hefley is only the second Northwest player to earn national Player of the Week honors from the NJCAA and the Rangers’ first national POTW honoree from JUCOWeekly. His defensive teammate, Jykeveous Hibbler, earned NJCAA Division I Defensive Player of the Week accolades in Week 2.

Northwest (7-0, 4-0 MACCC North) will host Holmes on Thursday for Homecoming and the regular season home finale at Bobby Franklin Field. The Bulldogs are much improved, coming in at 4-3 overall (3-2 MACCC North) and winners of three of their last four contests.

Pregame coverage begins at 6:30 P.M. on Ranger TV (nwccrangers.com/watch) and WHCQ-LD 8, with kickoff coming at 7 P.M. on Action News 5 Plus, available on your Roku, Apple TV or basic antenna (Channel 5.5).