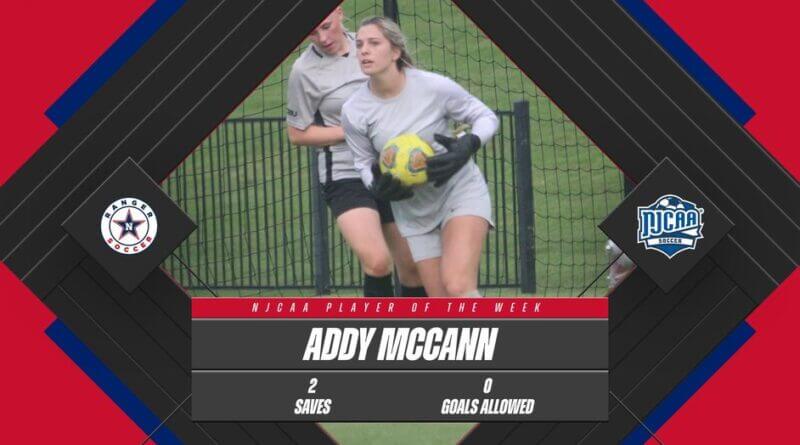 Less than 24 hours after earning her first-ever MACCC Goalkeeper of the Week honor, Northwest sophomore Addy McCann has landed the same award on the national level.

McCann was selected as the Division II Goalkeeper of the Week by the NJCAA, the organization announced on Tuesday morning. Both accolades are her first-career Player of the Week awards.

In a 2-0 victory against No. 20 Copiah-Lincoln last Friday, McCann posted her fourth shutout of the season while earning two saves. The Hernando native has started nearly every game for No. 6 Northwest this season.

Now with 90 saves on the year, McCann ranks eighth in the program’s career record books in saves. She needs five more to surpass Morgan Wilson’s 94 saves (2013) and 10 more saves would give her 100 career stops, moving her to fifth all-time.

McCann is the first Northwest player to earn NJCAA Goalkeeper of the Week honors since Liv Nault on September 6, 2017. At that time, Nault won for compiling 20 saves against one goal allowed in a 2-1 stretch against Meridian, Mississippi Gulf Coast and Southwest Mississippi.
Northwest will close out conference play on Friday, Oct. 21 against Itawamba for Sophomore Day. The match is scheduled for a 1 p.m. start time on Ranger TV (nwccrangers.com/watch) and Facebook Live.