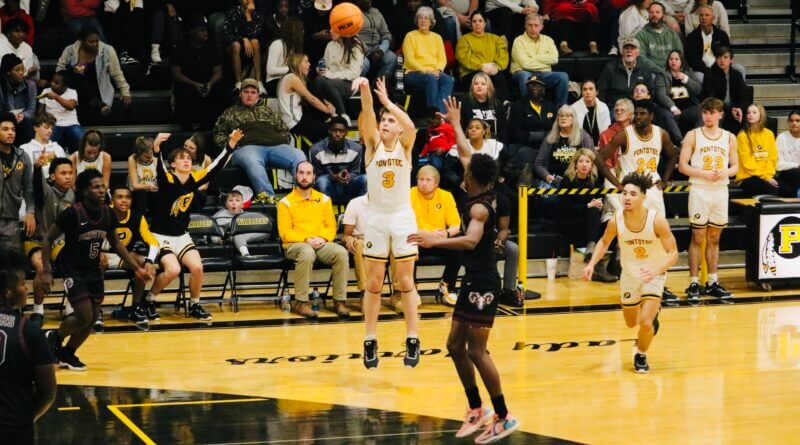 Pontotoc, MS- Pontotoc hosted Houston on Friday for what appeared to be a typical December division game.

Pontotoc is off to a fantastic start this season (11-1), while Houston is still finding their way. There was no reason to expect too much excitement.

The Warriors jumped out to a quick lead and never looked back on their way to a 106-58 win.

But the final score wasn’t the story.

Jack Sansing made a couple of early 3-pointers before Zane Tipler and Tyler Shepherd joined him. The senior trio went 5-13 from the 3-point line in the first quarter.

Adin Johnson didn’t take a shot in the first quarter but went 3-7 in the second. Tipler sniped three more as well, including one at the halftime buzzer.

The Warriors were 12-27 at the break and buzz began to spread that they could break the state record for most 3-pointers made in a game.

Leake Academy set a new girl’s record earlier this season by making 20, and then the Brookhaven Academy girls tied it in a later game.

We are still working to confirm the exact record for boys, but the late Gerald Snider once told Mississippi Sports the record was 21. I don’t know of a better source.

Pontotoc began the opening possession of the third by firing up three misses from deep. It appeared the record would be safe, but the Warriors kept up their barrage. Adin Johnson heated up to go 3-4 in the third and Zane Tipler added two more as well.

With 17 made long ones heading into the fourth, the number 20 was never going to last.

Tipler started it off in the final period, before Jack Sansing made back-to-back threes, including number 20.

Then Johnson made three in a row, including the one that broke the clock and set the crowd into a frenzy.

Tyler Shepherd (who was recognized before the game for 1,000 career points) finished it off with the 24th and final made three of the game.

Johnson and Tipler both had a career high in three pointers made.

Good team defense and the unselfish play of Rhett Robinson, Dawson Rice, and Emarion Hinton allowed the Warriors to get many quality looks for their shooters. The Pontotoc coaching staff let the players play. The bench, the Lady Warriors, and the crowd brought energy all game long.

It was one of those special nights in a high school gym that people will remember for a long time.