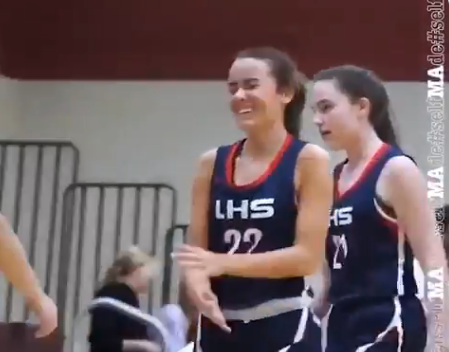 Your team is trailing, the clock is winding down, the ball bounces around before finally finding your hands with no time to think, just shoot.

That’s a scene we’ve all played out in back yards, in front of waste baskets with wadded up pieces of paper and with the laundry…..3, 2, 1….shoot.

Lewisburg Junior Reagan Salter had that moment. Maybe not in in ideal circumstances, her team was traling 17-9 and it was the end of the first quarter, not the game.

But the ball was in her hand, the Lady Patriots leading scorer, and she let it fly.

Since that shot against St. George’s on December 20th, Reagan Salter has gone viral. Features on Barstool Sports, ESPNw and more.

“Of course I air balled it, so I was trying to play it off and just joke around with the other girls on the team,” Salter said.

“But I didn’t know someone was videoing it and posted it.

The video has been viewed over 2 million total times on social media.

“I think it’s pretty funny that it got that many views and ended up on so many big pages,” Salter said of her internet moment.