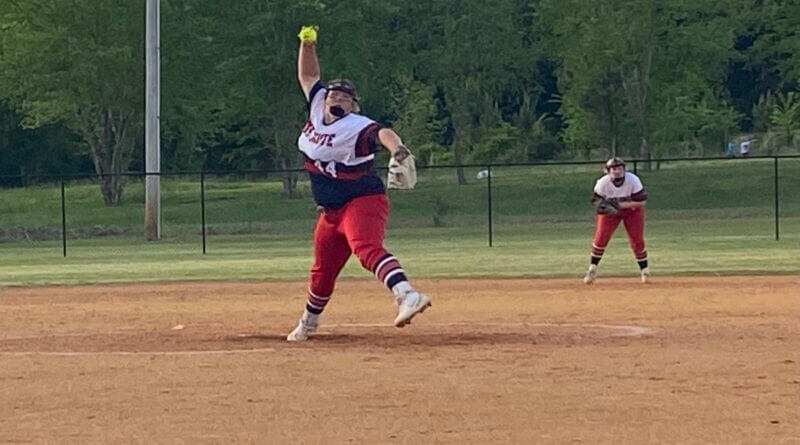 Seven innings was not enough Monday night in West Union.

After squandering a 6-2 seventh-inning lead, the Pine Grove Lady Panthers finished the job in extra innings with a 7-6 victory after eight innings in Game One of the second round of the 1A State Softball Playoffs.

The Lady Panthers hopped out to a lead and never trailed after Ellie Fryar led off the game with single. She would later score on a RBI groundout to end the team’s first at-bat with a 1-0 advantage.

The action went quiet after the top half of the first with both teams combining for four hits through the first three innings.

However, Pine Grove found their stride in the top of the fourth.

Hailey Keeton and Maddee Hall led off with singles, with the latter having an error attached to it in the outfield. This allowed Keeton to score and Hall to reach third. Two batters later, Carley Greer laid down a great bunt that allowed Hall to score and stretch it to 3-0.

Another two batters later, Jazzie Smithey notched a RBI triple from the nine-spot in the line and scored on the next at-bat from a Fryar single to take a 5-0 lead after three and a half innings.

West Union did not go down easy after the fact.

In the bottom of the fourth, Parker Gates smacked a two-run home run in left-center to get her Lady Eagles on the board and cut the lead to 5-2.

The next two innings went scoreless, which set the game up for its exciting finish.

The Lady Panthers added an insurance run, thanks to a Madison Foster triple that led the inning off.

The Lady Eagles needed a spark in the bottom of the seventh down four, and the bats came alive all of the sudden. Sadie Cobb reached first with an error and was followed up by two straight singles from Emma Callicutt and Eden Conlee.

Representing the tying run with a runner on third, Ole Miss-commit Annie Orman provided the hit of the game for West Union with an RBI double down the left field line. After her hit, she stole third base on the next pitch and scored on a wild throw from the catcher to tie the game at 6-all.

Despite the fight to get back into it, Pine Grove would not let this game slip away.

Hall scored off an RBI groundout from Greer, and the pitcher Lizzie Meeks struck out two in the bottom half of the eighth to secure Game One for the Lady Panthers.

With the win, Pine Grove needs just one more win to move into the third-round of the playoffs. West Union will need a backend sweep to advance from the three-game series.

The Lady Panthers will host Game Two tomorrow starting at 5 p.m. with Game Three to follow if necessary.