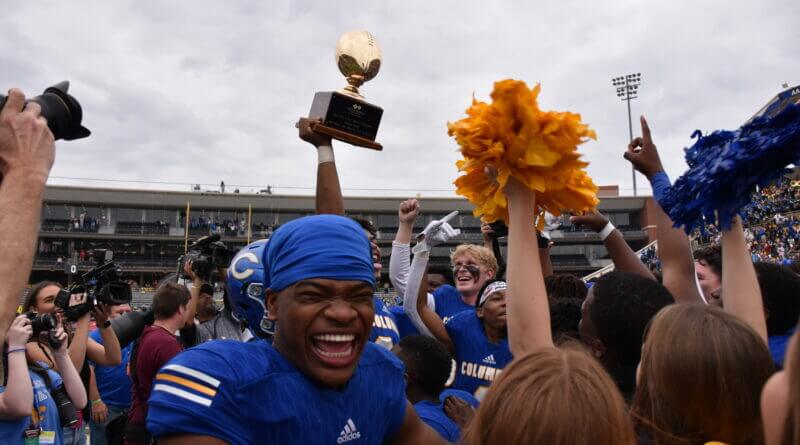 HATTIESBURG — Columbia’s vaunted defense struggled to keep Senatobia off the field in the first half. However, when it mattered most and when their backs were against the ball, they made the final stop. As a result, the Wildcats are state champions.

Columbia blanked the Warriors in the second half as a late scoop-and-score and missed game-winning field goal allowed the Wildcats to win the MHSAA Class 4A State Championship 22-21 over Senatobia.

“We made big plays down the stretch when we needed them. The guys flew to the ball in the second half. Our secondary stepped up when they had to,” Columbia head coach Chip Bilderback said.

Tailback Omar Johnson rushed for 89 yards on 21 carries and had a rushing score. Carter Smith completed 11 of 13 passes for 40 yards and threw a touchdown pass to Joshua Brown. Jalen Anderson led the Wildcats with 15 tackles en route to MVP honors after an outstanding defensive half of football.

In attempt to keep Senatobia off the field early, the Wildcats used the ground game to score on their opening possession. Carter Smith connected with Joshua Brown for a nine-yard touchdown pass, giving Columbia a 7-0 lead with 5:08 left in the opening quarter. Jordan Osborn carried the Warriors downfield in order to respond, but later faced 4th-and-5 outside Columbia’s red zone. Senatobia took their chances and it paid off. Tyreese Hullette found Hunter Mabry on a slant and Mabry made his way to the end zone for a 26-yard touchdown strike, tying the game at seven apiece.

After forcing a Wildcat punt, the Warriors had a golden opportunity to pull ahead. After another methodical drive, Senatobia head coach Brooks Oakley dug into his bag of tricks. Hullette threw a backwards pass to Jabrysten Abram, who found Mabry open for a 20-yard touchdown pass. That game Senatobia their first lead of the game, 14-7 nearing the midway point of the second quarter. Columbia proceeded to go right back to the ground game and tied the game after an Omar Johnson goal line touchdown.

With about three minutes left in the first half, the Warriors did everything in their power to take the lead going into the locker room. After a third gutsy fourth down conversion, Senatobia stayed on the attack and executed a perfect fake punt leading to another touchdown pass from Hullette to Mabry. The Warriors had a 21-14 lead at halftime.

“They hit us in the mouth,” Bilderback said.

Senatobia received the second half kickoff with a chance to double dip and take a two score lead. The Wildcat defense tighten up and held their ground during the quarter, but turnovers did them no favors deep into the third quarter. Columbia had some good stops, but the biggest one eventually led to an eight-point swing. Deep into Wildcat territory, Osborn dragged Columbia defenders into the red zone, but lost the football and Kentrell Jackson took it 81 yards the other way. The Wildcats were about to kick the game tying PAT, but an offsides penalty moved the ball closer and Johnson made them pay with a two-point conversion. Just like that, Columbia had a 22-21 lead going into the final quarter of play.

“We wanted to take the momentum and not give it back. We took a chance. No one is going to stop Omar Johnson for a yard-and-a-half,” Bilderback said.

Both teams traded punt after punt before Senatobia had the football near midfield a with 3:39 left in the game. Hullette used his leg to carry Senatobia on Columbia’s doorstep with under a minute left. The Wildcats held for three straight plays, setting up a 21-yard, game-winning field goal try under 30 seconds left to play. The kick sailed wide left and the Columbia sideline erupted, knowing the had just won a state title. The Wildcats finish the 2021 season at 14-1.