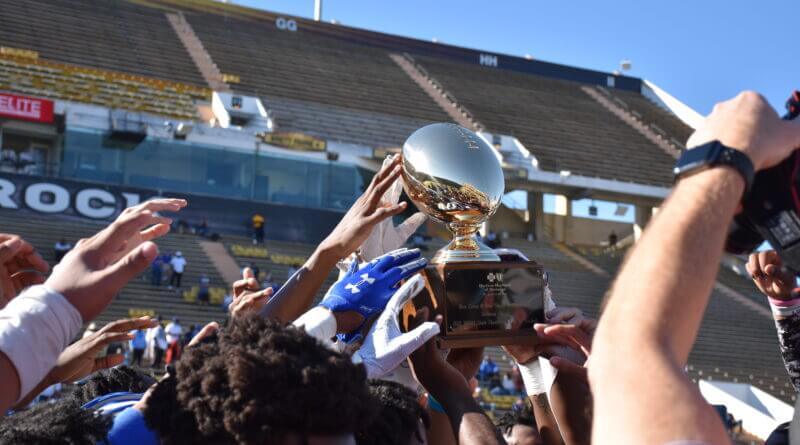 HATTIESBURG — After an 0-4 start to the 2021 season, the Jefferson Davis County Jaguars just kept doing the things that made their dynasty to begin with: play fast, play physical, execute and be resilient in the face of adversity. As a result, JDC’s dynasty continues on.

The Jaguars blanked Amory in the second half and pulled away in order to win the MHSAA Class 3A State Championship over the Panthers 42-10. The win is JDC’s third state title in six years of the school’s history. Head coach Lance Mancuso won his ninth state title as head coach and remained undefeated on the big stage. Friday’s win just so happened to be on his birthday as well.

Malcom Hartzog and Demarrio Booth combined for 416 all-purpose while the latter scored four touchdowns and had an interception en route to winning championship MVP.

“(Booth) is a great player. He gets overshadowed a lot because he’s an inside runner. It’s so awesome to see the talent he is,” Mancuso said.

Right off the bat, the Panthers ended a promising drive just three plays in. French put the ball on the ground while JDC capitalized four plays later. Malcom Hartzog scored a goal line touchdown to go up 6-0 just under three minutes into the opening quarter. Then, the big plays opened up for the Jaguars. After forcing a punt, Booth ran up the gut and found himself in the end zone for a 44-yard score. Following a two-point conversion, the Jaguars had a 14-0 lead with 4:25 left in the first quarter.

However, on Amory’s next drive, the Panthers finally hit a big play, Jatarian Ware found Cameron Haynes in one-on-one coverage and the two connected for a 57-yard touchdown pass. It was soon a two-score game again as Booth hit another home run play, a 61-yard touchdown to make it 22-7 JDC lead on one of the first plays of the second quarter. Amory picked up right where they left off, but their drive stalled in the red zone thanks to a false start penalty and high snap. Dylan Thompson did manage to connect on a 28-yard field goal to trail by 12 going into the locker room.

The Jaguars proceeded to hit Amory in the mouth coming out of the locker room and didn’t look back. While JDC shut down the Panther run game defensively, Booth continued his dominance with a little help along the way. Hartzog scored on the opening possession of the second half to widen the lead to 20 while Booth scored two more times, add in an interception for good measure.

Jefferson County finishes the 2021 season at 11-4 while winning their 50th game in the program’s six year history.

“It goes to show what kind of resilience they have. They kept faith and belief in our program, what we do everyday. These kids understand what we expect out of them,” Mancuso said.