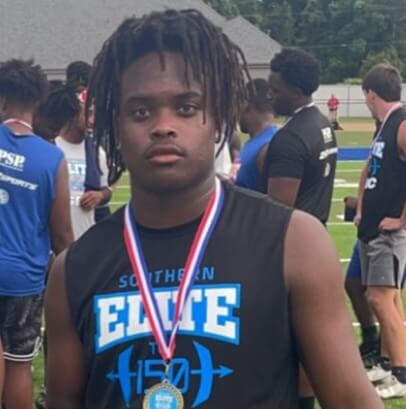 Jay Beamon was on point today. He was throwing passes and hitting his targets on the money. This kid is getting better snd better everyday.

Jay Beamon has been making noise for himself all summer. The 6-2 205lb QB out of Cleveland Central has a lot of potential. His arm is just amazing and he can make any throw from anywhere on the field. He moves very well in the pocket, but needs to make sure he keeps his feer active. He has improved his game a lot since the last time I seen him. He now knows when to hit the check down and doesn’t always look for the deep ball. He has done a lot better with making sure he gets more legs into his releases. He has been moving his hips very well when he throws. Jay is showing the more he works the better he gets.

Beamon was lights out in 7v7 today. He was leading his team and being very vocal with each group that he worked with. You would have thought he had been playing with these guys his whole life. He takes control of the game and loves to be a playmaker. He is a very coachable kid that doesn’t make a lot of mistakes. The way he looks off safeties is something to see. He can disguise his reads and then come back to his primary receiver with such grace. Jay Beamon is very polished to be so young. I think we are looking at a 2025 guy that will put up a lot of numbers this year. Offers will start rolling in for him real soon.

“I loved it,” said Jay Beamon. “It was a lot of competition out there yesterday. I noticed I need to work on my footwork. That’s where I lack at a little bit, but I’m working everyday on pocket movement and how to keep my feet active in the pocket.”