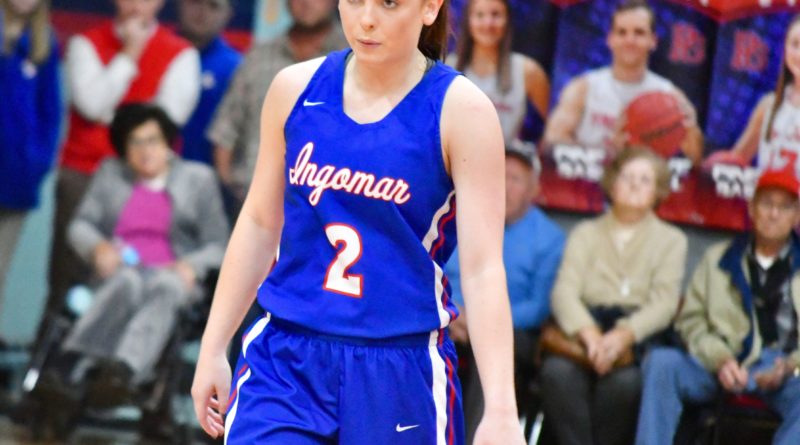 Friday, in a matchup of teams that have a combined five Mississippi state basketball titles between them in the last three seasons, the Ingomar Lady Falcons edged the Pine Grove Lady Panthers in a three overtime thriller, 72-64 at Pine Grove.

“I think everybody got their money’s worth. Probably should have charged more to get in, in hindsight,” said Ingomar coach Trent Adair. “It was just two teams that show fire and grit and competitiveness. Both teams played hard, both teams made plays and we were fortunate enough to make one or two more.”

In a slugfest from the start, Pine Grove sprinted to an early 12-4 lead and led 16-10 after one quarter. The Lady Falcons bounced back with a 15-2 second quarter-run to lead 25-18 at the break. The second half saw both teams trade baskets, runs, turnovers and rebounds which ended with a 49-49 tie at the fourth quarter buzzer.

“Both teams made big plays and big shots on both ends. And we knew that, whoever made the plays was gonna win,” said Pine Grove coach Katie Bates,” but scoring only two points in the second quarter, that’s your ballgame.”

Taylor Flectcher, who led Pine Grove with 21 points, sank a floater in the lane with four seconds remaining in the first extra period to send it to overtime number two, tied at 55. Later a pair of big buckets by Karlie Rogers were countered by two key baskets by Ingomar’s Patience Golden to force the third and final overtime, knotted at 64.

Believe in your Self

In the final frame, Ingomar’s Gara Beth Self imposed her will, scoring five of her game-high 31 points to seal the victory in the state-championship type atmosphere inside Pine Grove Gym.

“It boils down to her competitive nature. She is a fierce a competitor as you’ll find,” Adair said of Self. “She’s cutthroat. She won’t even let little kids win games against her. To me, the most important thing she has is that competitiveness and her understanding of getting people where they need to be.”

Pine Grove coach Katie Bates agreed that it was a great matchup of quality teams, but doesn’t get into moral victories.

“We came out and punched them in the mouth and they retaliate and we didn’t know what to do. We just kind of stood there. But it was a good game. We learned a lot about ourselves and that’ one of the things that I wanted to see, just how this team would do because we have some new players who have never been in that situation before where they have to make plays. I’m proud of them, but we don’t get into moral victories and stuff. We had places where we should have won, so we are disappointed.”

It was Ingomar’s fifth straight win in the series. The two class 1A and 2A juggernauts won’t meet again until the 2019 season and Adair, who has been friends with Bates for years, doesn’t look forward to it.

“I’ll be honest with you, it’s not fun,” he said. We’ve been friends a long time and there are two angles to this. Some people like playing their friends so they have bragging rights but I’m not a bragger so I don’t have any enjoyment in this whatsoever. One of us is gonna loss and I hate it. The good thing about is that we don’t have to do this again until the end of November, next year.”