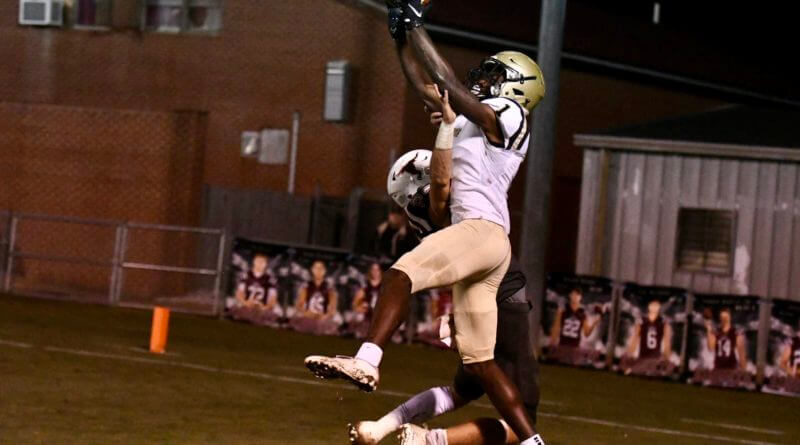 Amory’s offense needed a bounce back performance after being held to a season low last week against New Albany.

The Panthers got a big night from the trio of Hunter Jones, Jay Hampton and Braxton Griffin as Amory picked up the first district win of the season 37-29 over Kossuth.

Jones accounted for all 5 Amory touchdowns through the air, hitting Hampton for 3 scores and Griffin for a pair of scores.

Hampton started off the game catching a 73 yard score to give Amory a 7-0 lead. The home team Aggies answered back with a pie of successive scores on the ground, one from Zamarious Alexander and one from Brock Seago to pull ahead 14-7.

The fireworks were just getting started.

Jones hit Griffin with a pair of scores in the 2nd quarter, the first a 91 yard score and the 2nd a 24 yard touchdown with just :49 to play in the first half.

Amory would not trail from that point forward.

Hampton added a pair of athletic scores on jump balls in the end zone that showed off his playmakimg ability, the first from 24 yards on fourth down. Nathaniel Walker them got a big safety for Amory to give them a two score lead. Kossuth answers back with a long touchdown of their own before Hampton got another jump ball end zone touchdown with 7:58 to go that finished the scoring for the Panthers.

Jones picked up a 3rd down conversion late in the fourth quarter that iced the game and allowed Amory to move to 5-1 on the season, 1-0 in district play.

Jones finished with 374 total passing yards. Hampton hauled in 5 catches for 153 yards while Griffin had 6 catches for 173 yards.