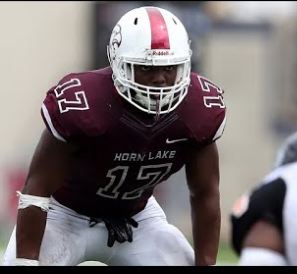 To say Nakobe Dean would be a game changer for the taste in the Ole Miss fan bases collective mouth is an understatement.

Nakobe Dean is one of the top 20 all-time high school ILB prospects and the best defensive prospect in Mississippi history  (slightly ahead of Chris Jones, Tony Conner and Jeffrey Simmons). He is the only five star recruit in a loaded Mississippi high school class this year and an instant impact type player for an Ole Miss defense that needs a restart.

He moved up his signing to tomorrow after playing for team Mississippi yesterday. It’s Ole Miss, Bama or Georgia. He spent the entire time at the MS/AL game talking about representing the ‘Sip and threw up the Landshark after several big plays.

He is playing it extremely close to the vest, but all things considered it would be the biggest signing in Ole Miss history given the circumstances.

The good news, Rebel fans: there is anecdotal evidence that Ole Miss is about to pull off a bit of a surprise and land the coveted 5-star. A few people inside the Ole Miss program are convinced this signing is happening. There are cryptic tweets if you are a fan of reading tea leaves, like this one from Tyler Siskey (Ole Miss Football Assistant Athletics Director for Player Personnel) this morning after Dean was set to tell the lucky school who will have his services for the next 3-4 years

The bad news: the Rebels are up against recruiting behemoths Georgia and Alabama. Several national recruiting analysts are going with UGA but they admit its up in the air.

At the end of today, that’s where it stands. Up in the air.

But tomorrow at 1:20 live on ESPN it will fall from up in the air to on air. Here’s hoping for another Landshark moment.