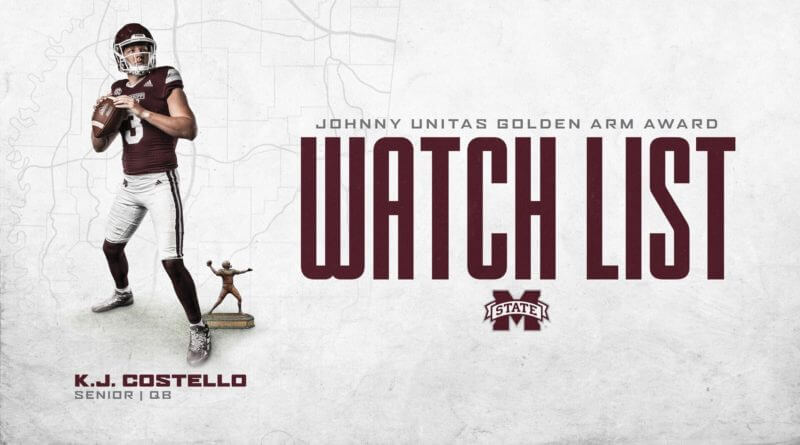 On Tuesday, it was released that graduate transfer quarterback K.J. Costello had been named to the Johnny Unitas Golden Arm Award Watchlist. The award is given annually to college football’s top signal caller.

The full press release by Mississippi State Athletics can be read below.

Graduate quarterback K.J. Costello was named to the preseason watch list for the Johnny Unitas Golden Arm Award on Tuesday. It marked the second consecutive season that he received the recognition.

Costello was a two-time captain at Stanford who started 25 games over the course of three seasons, prior to arriving in Starkville. He has gone 495-of-791 passing for 6,151 yards and 49 touchdowns during his career.

In 2018, Costello earned second-team All-Pac-12 honors when he started all 13 games and passed for 3,540 yards, the second-highest single-season total in team history.

The namesake of the Golden Arm Award has a storied history. Johnny Unitas was an 18-year veteran of the NFL, who played his collegiate career at the University of

Louisville before joining the Baltimore Colts in 1958. His career passing figures include 2,830 pass completions for 40,239 yards, 290 touchdowns and throwing a touchdown pass in 47 consecutive games.

In July, Costello was also named to the watch list for the Maxwell Award, given to the most outstanding player in college football, for the second time in his career.