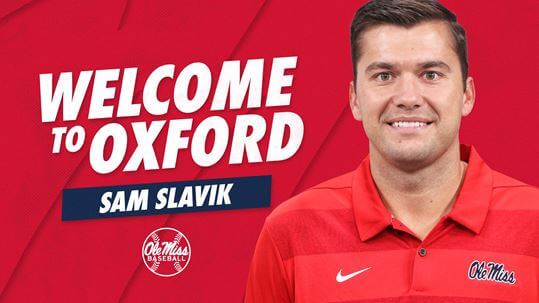 On Monday, the Rebels announced the addition of Sam Slavik to the baseball program as the new Coordinator of Operations in External Affairs.

Slavik has spent the past seven years as an assistant coach at Ohio Northern. Prior to that, he volunteered for two years on the staff at Cincinnati.

The full press release from Ole Miss Athletics can be read below.

“We’re really excited to get Sam on our staff,” said head coach Mike Bianco. “This is a very important role in our program. The duties that are required for this, Sam has done. At Ohio Northern, he wore so many different hats—pitching coach, recruiting coordinator and many other roles. We’re excited to have him on board.”

A native of Coldwater, Ohio, Slavik helped guide Ohio Northern to winning seasons in each of the past six full campaigns. The Polar Bears were out to a 5-5 record before the 2020 season was cut short. In 2018, Slavik helped coach ONU to its first Ohio Athletic Conference Tournament berth in 18 seasons and followed that up in 2019 with the program’s first back-to-back OAC Tournament appearances since 1999-2000. The Polar Bears also set a school record with 80 wins in a three-year span from 2017-19.

“I am excited and gracious for the opportunity to join the baseball staff at Ole Miss,” Slavik said. “Coach Bianco has given me an incredible chance to be a part of one of the best college baseball programs in the country. I look forward to contributing to the success of Ole Miss baseball.”

Slavik also has extensive coaching and front office experience in the Great Lakes Summer Collegiate Baseball League, beginning in 2013 as the pitching coach for the Lima Locos. He then served as the assistant general manager and head coach of the Grand Lake Mariners from 2014 through 2015.

Prior to his stint at Ohio Northern, Slavik spent two seasons as the volunteer assistant coach for Cincinnati, helping with the pitching staff as well as operations for the program.

A native of Coldwater, Ohio, Slavik was a member of the Cincinnati baseball team from 2008 through 2011. Slavik made 41 career appearances for the Bearcats pitching staff, including two starts. He closed his career with a 6-1 record, 4.37 ERA, 61 strikeouts and 24 walks allowed through 74.1 innings of action. He was a three-time Big East All-Academic Team honoree.

Slavik is joined in Oxford by his wife, Allie, and their son, Zane.