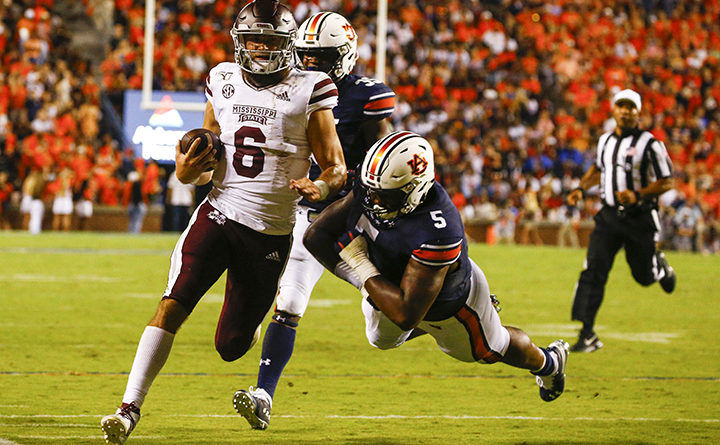 This game feels more important for Mississippi State than it is for Tennessee. If the Bulldogs win, it could be the difference between 5-7 and 6-6. For Tennessee, it could be the difference between 3-9 and 4-8. It’s also an interesting matchup when it comes to the head coaches. With both coaches in their second year, they’re both trying to turn things around within their own fanbases. It’s likely going to be harder for Jeremy Pruitt than Joe Moorhead in that regard, but there’s an argument to be made that Moorhead entered his tenure with more expectations than Jeremy Pruitt did entering his tenure at Tennessee.

Entering this game, both teams have questions at quarterback but due to different circumstances. The Vols are likely going to start Brian Maurer over the struggling Jarrett Guarantano, but it wouldn’t be a shock if Guarantano got some snaps behind center. On the Mississippi State side, Garrett Shrader should get the start with how good he has been this year but if you’re a State fan you should feel comfortable enough with whoever the starter is going to be.

Tennessee doesn’t do anything particularly well on offense, but they do have 2 really good wide receivers in Marquez Callaway and Jauan Jennings with Jennings being the go to guy for the Vols. Jennings has 26 receptions this season for 395 yards and 5 touchdowns, while Callaway has 13 receptions for 259 yards and 3 touchdowns. When it comes to running the ball, which is how Tennessee should attack the Mississippi State defense, Ty Chandler will likely see the bulk of the carries. Chandler has 59 rush attempts this year for 320 yards and 2 touchdowns. Highly touted freshman running back Eric Gray will also see work in the backfield for the Vols, he has 43 rush attempts for 170 yards. Tim Jordan is the Vols’ third option at RB, he has 24 rushes for 112 yards so for this season.

Mississippi State should stick to what they do best and that’s running the football, something the Vols defense isn’t particularly great in stopping. Kylin Hill, the SEC’s leading rusher, should receive 25+ rushes for this Bulldog offense, no matter who the starting quarterback is on Saturday in Rocky Top. Osirus Mitchell is still the biggest surprise for the Bulldogs’ offense this season, he’s the only pass catcher to have double digit receptions this season. Mitchell has 19 receptions for 277 yards and 4 touchdowns, his emergence has been huge for the offense so whenever the offense gets into passing situations he’ll be the likely target.

When it comes to run defenses in the conference, Mississippi State and Tennessee rank 11th and 12th. Respectively, neither team is good at defending the run and it has more to do with tackling at the second and third levels than it does with the defensive lines. Tennessee, however, is better against the pass than one would think ranking 6th in the conference in pass defense. The Vols have allowed 209.6 yards per game through the air while they’ve allowed 167.4 on the ground, leaving them with the 8th best defense in the SEC when it comes to yards allowed per game. Individually, freshman linebacker Henry To’o To’o has been arguably the Vols best player this season. He has 32 total tackles this season, which is second on the team to defensive back Theo Jackson (33). This game will likely come down to who’s team can stop the run and make the big stop at the end of the game.

For Mississippi State, you can point the finger at the suspensions due to tutorgate but that’s just making excuses at this point. The team and the coaching staff knew heading into the season they would be without some key playmakers, while also knowing that early on it would likely be a struggle for the younger players with them getting used to playing division 1 football. Entering the back half of the season, there should be no more excuses for this Mississippi State defense. The young guys will either make the plays that need to be made or they won’t, it’s that simple. The good news for the Mississippi State defense, however, is that they’re forcing teams into turnovers more than any other team in the conference with 14 forced turnovers.

It wouldn’t be shocking to see Martin Emerson more in this game than in previous games with how physical Tennessee’s WRs are in Jauan Jennings and Marquez Callaway. Of course, those guys are veteran SEC players so it will be a tough matchup for the freshman but physically, he matches up better than the smaller Maurice Smitherman.

This game can go one to two ways, it will be high scoring with zero defense being played or it will be a blowout win for whoever ends up showing up on defense. On the road in the Moorhead era, other than at Ole Miss last season, Mississippi State has been very underwhelming. It’s obvious to expect that to not carry over into Knoxville against a bad Vols team, but at this point in time under Moorhead it’s unsure what team will take the field on Saturday. For Pruitt and the Vols, they need a conference win against a respectable opponent at home just to show the fans steps are being taken in the right direction. Vegas has Mississippi State as a 7 point favorite as this is being written, but it feels more like a toss up in my mind. Mississippi State has more at stake in this game and that’s why the Bulldogs leave Neyland Stadium on Saturday with a win. Final Score: Mississippi State 38, Tennessee 27